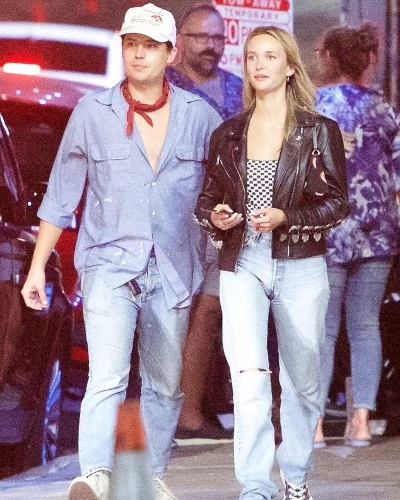 Cole Sprouse gave a sweet tribute to his girlfriend Ari Fournier for her 23rd birthday on 28th August 2021. He was seen going on a dinner date in Los Angeles for the birthday dinner. Ari wore a leather jacket, checkered shirt underneath, and jeans for the dinner while Cole rocked a blue shirt, white cap, jeans, and sneakers.

As per the birthday post, Cole shared multiple pictures of his beautiful girlfriend mostly eating food and drinking wine. The first picture was her drinking white wine at a Napa Valley vineyard. He posted an image of her toasting with a red wine glass and a photo of her enjoying her drink.

Other pictures were of her scarfing down a burrito and noodles in another of her with a McDonald’s burger and a cone of ice cream. He captioned the series of pictures,

“Birthday girl gunna beat my ass for these.”

The couple went Instagram official in July after being publicly spotted in March as they walked holding hands during an outing in Vancouver, Canada.

Italy-born Cole Sprouse is an American actor seen in TV series along with his twin brother Dylan. He is a popular TV and film actor. He is well-known for acting since early childhood in several films and TV series.

As of now, he is famously recognized for starring in an American TV sitcom named The Suite Life of Zack and Cody. Additionally, he is also a prominent figure among the public for playing Jughead Jones in the teenage drama series, Riverdale. Read more bio…