Ariana Fletcher is a young industrialist and model. She is dating a rapper called Moneybagg Yo. 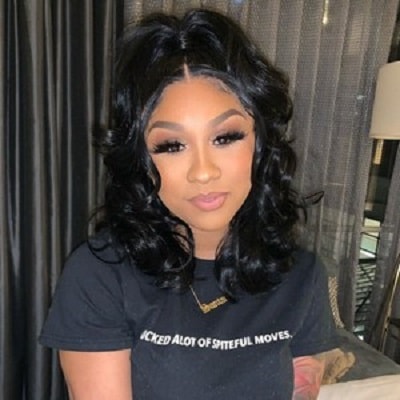 Ariana Fletcher is currently in a relationship. She is dating a rapper called Moneybagg Yo. He recently confirms their affair.

Previously, she was in a relationship with a rapper, Herbert Randall Wright III, also known as Lil Herb. Although the couple has parted ways, they have a son named Yosohn and threw a baby shower for their close friend in December 2018.

In April 2019, Herb got arrested for the domestic battery as he had a physical altercation with Ariana. A week later, he got bailed for $2000 and posted a video on Instagram accusing her of stealing his mother’s jewelry.

After the breakup, Ariana began dating a boxer named, Gervanto Davis and shared photos of them hanging out together. However, it did not last long, and Gervanto deleted all the posts from Instagram linked with Ariana.

Who is Ariana  Fletcher?

Ariana Fletcher is a young industrialist and model. In addition, she is the co-founder of the KYCHE Extensions hair company.

Ariana was born on the 12th of July in 1995 to her parents in Chicago, Illinois of All-American ethnicity.

She grew up with her parents in the city of Chicago, and reportedly she had a restrained relationship with her father.

She shared her childhood with her brother, Kyle who passed away tragically at a very young age.

Ariana’s rise to stardom has been a rollercoaster ride as she started from the bottom and struggled to get to the top.

After her brother Kyle passed away, she dropped out of her high school to work at spas, salons, and Adrianna’s night club to support her family.

Ariana Fletcher started her career as a waitress at Adrianna’s Nightclub in her hometown Chicago.

As she grew up, Ariana became an Instagram star who gained a lot of fame and attention from her Instagram account for model shoots and company ventures that she uploads. She rose to fame through Instagram under the username therealkylesister in 2015 and never look back.

As an entrepreneur, she launched her own company KYCHE Extensions (a hair company) on Instagram. She and fitness instructor Tiara Walton worked together.

She has an estimated net worth of around $10 million as of 2022 and she makes most of her income from her business, KYChe Extensions, and paid promotions on Instagram.

The eyes and hair of Ariana Fletcher are dark brown and black respectively. She has a height of 5 ft and 1 inch and has a decent weight.

You may also like to read about John Crowley, Neil Burger, and Mark A. Altman.