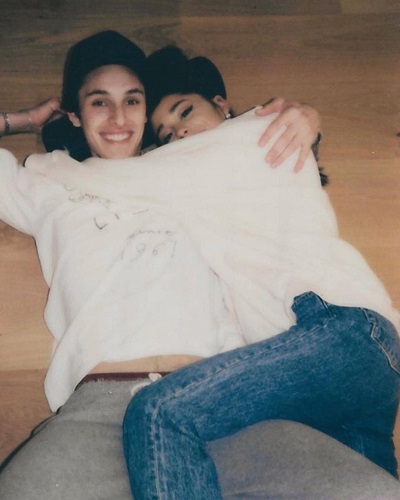 ‘toi et moi’ ring looks more than perfect on 7 Rings singer Ariana Grande! On 20th December 2020, singer Ariana announced that she is engaged to her boyfriend of 9-months Dalton Gomez. Grande shared some adorable pictures of them featuring the beautiful 2021 trendy ring. She captioned it,

“forever n then some”

Dalton Gomez proposed to Ariana with a striking 5-carat colorless oval with a stunning elongated 1:45 ratio and top VS clarity. As per Engagement Ring Concierge, Michelle Demaree her ring has a unique diamond and pearl setting and a  rare offset South Sea pearl.

Her ring is estimated to be worth more than a quarter of a million dollars. Michelle said,

“This is easily a multiple six figure rock worth $250,000 to $350,000. It embodies their authentic love for one another and at the end of the day that’s all that matters.”

After knowing about the pearl on her ring fans made the speculation that the pearl may be from the ring her beloved grandmother had made for her in the year 2014 using a pearl from her grandfather’s tie pin. The speculations made by fans have the possibility to be true. But Grande has not given any details and specifications on her ring.

Now talking about her engagement of 2018 with Pete Davidson, he proposed to her with a $93,000 ring which was crafted by Manhattan-based jeweler Greg Yuna. It was a pear-shaped diamond ring. Ariana returned the ring after they called off their engagement.

Also read Keshia Knight Pulliam and Brad James are officially engaged! Know about their relationship and net worth of Keshia

When is the Grande-Gomez wedding?

After Ariana Grande announced her engagement to Dalton Gomez, her brother congratulated her through a tweet. Frankie James Grande tweeted,

“I am so happy for my sister and so excited to (officially) welcome Dalton into the family! YAY! This is just the beginning of a long-lasting life filled with laughter & love. Ugh. I love you Ariana & Dalton! HAPPY ENGAGEMENT!”

Her family is more than happy with the engagement news. The love birds seem very much in love. They might go to a wedding soon. They are yet to reveal their wedding date. Fans are hoping for Ariana’s wedding this time with Dalton.

Ariana Grande is an American singer and actress. She is best known for portraying the character Cat Valentine on the Nickelodeon sitcom “Victorious” before getting a big break in the music. Her hit songs include One Last Time, Problem, Bang Bang, etc. Read more bio…

Mzbel reveals the reason for her choice to remain single and never marry ever!
Tags : 7 Rings Singer