Ariana Grande and Pete Davidson end relationship and calls off engagement! “too much too soon” says sources! 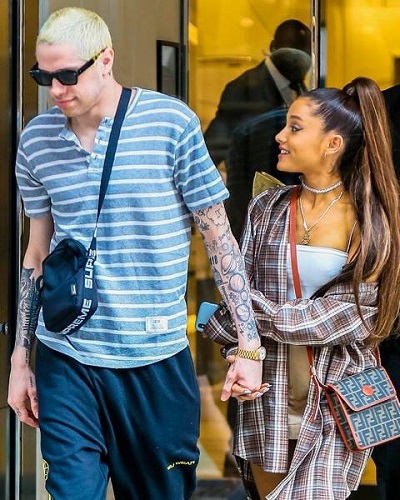 Also read: Pete Davidson and Ariana Grande share a sweet kiss on stage! Know more about their relationship and engagement!

Soon after their engagement, Ariana Grande and Pete Davidson had moved in together in a luxurious apartment in Manhattan. The craze lovers had even got tattoos including initials“AG” on Pete’s right thumb and “Pete” on Ariana’s left finger!

But suddenly out of the blue, there are reports that they have now called off their engagement and ended their relationship!

This comes only a month after the death of Grande’s ex-boyfriend Mac Miller. They had dated for 2 years. He had died of an apparent drug overdose on September 7 and many blamed Ariana for his death. Was it a reason their relationship hit the turmoil?

A source told the people:

“It was way too much too soon…it’s not shocking to anyone.”

Only on 8th October, Ariana had posted a PDA video in which Pete was showering her with kisses.

Ariana and Pete had skipped the Emmy Awards which was held on September 17. Ariana’s reps had released a statement following her absence from the awards.

“Given the events of the past couple of years, Ariana is going to take some much needed time to heal and mend.

She will be staying close to home and using this period to spend time with her loved ones and work on new music without deadline.”

Also read: Ariana Grande Says She is ‘Broken’ After the Suspected Terrorist Attack at Her Manchester Concert and she’s ‘so so sorry,’ reportedly suspends world tour!!

Also on Saturday, she was set to perform at a fundraiser for cancer research but did not make her appearance. Her manager Scooter Braun did give a speech saying Ariana is going through a difficult time.

Neither Ariana Grande, Pete Davidson nor their representatives have spoken about the breakup. But a source added that they might be over, for now, they are not ruling any possibility in the future.

Ariana Grande was born on June 26, 1993, in Boca Raton, Florida, the U.S. Her full name is Ariana Grande-Butera. Her father is Joan Grande and her mother is Edward Butera.  She has an older half-brother named  Frankie Grande. Ariana is of Italian descent. Full bio…

Growing up with 8 siblings where all of them are into singing and playing instruments. Labrinth’s interest in music and singing developed right from his childhood days!
Tags : Ariana Grande's ex-boyfriend Breakup Rapper Singer Songwriter