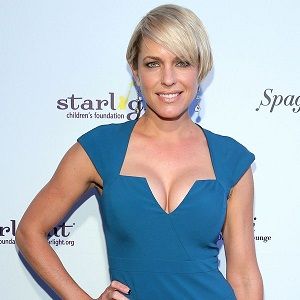 Anything on the ground is fine with me

In the year 1998-99, Arianne Zucker has been engaged to Michael Dietz. Then in 2002, she was married to her co-actor of Days of our lives Kyle Lowder. Then in August 2007, the couple separated but reconciled in 2008. They both had a daughter named Isabella Resse Lowder. And, in March 2014, they made confirmation of their divorce. After her divorce, she has been in a long-term relationship with Shawn Christian.

Who is Arianne Zucker?

Arianne Zucker is a popular female actress and model who is famous for her role as Nicole Walker in popular daytime soap opera broadcast-Days of our lives on NBC television network. Besides this, she also appeared in different TV commercials and also involved in singing and theater performance.

Popular female actress, model, singer, and theater performer, Arianne Zucker was born in Northridge, California but she was raised in Chatsworth. She is Jewish. Her birth name is Arianne Bethene Zucker.

She has altogether four family members along with her. Her father Barry is a plumber, mother Barbara is a lab technician and has an older brother named Todd.

There isn’t any information about her early life but she was known for her passion for the team in her school days and she was on her way to becoming a veterinarian before she became an actress.

Zucker graduated from Chatsworth High School in 1992. After her graduation from high school, she enrolled in Howard’s fine studio where her carrier started. After this, she began her studies as an actress at Los Angeles Pierce College.

Arianne began her carrier life at the age of sixteen. After she won her first modeling contest, she traveled to Paris, France, and then to Australia, Japan, and finally to New York City. In 1988, she auditioned and won the role of Nicole Walker on Days of our lives.

She also appeared in TV commercials along with national spots for Mazda and McDonald’s. She was also involved in various workshops which included her performances in Beth Henley’s Crimes of the Heart and Neil Simon’s The last of the red-hot lovers. In 1998-2006 and 2008-2017, she played a role as Nicole Walker in television series Day of our lives.

Arianne Zucker: Salary and Net Worth

In 2017 March, her net worth is estimated to be $6 million dollars. It was also calculated that her movie, Days of Our Lives collected $23.5 million in total.

After her divorce, there was a rumor that she used to date Michael Dietz, a screen co-actor. In 2017, there was another rumor that Arianne has been dating American television and film actor Shawn Christian.

Arianne has a height of 5 feet 9 inches and weighs around 60kg. She has blonde hair and blue eyes. She has a figure of 34-25-34 which makes her comfortable in any dresses she wears with bra size is 34B.

Billy Bush’s interview 7 months after release of the controversial misogynistic tapes, his regrets and his changed perspectives of life and women: Learn on it here!