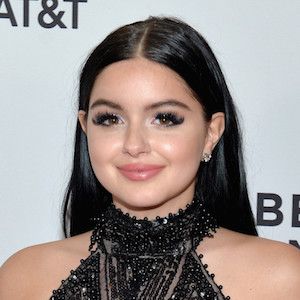 My mother wanted to name me Jackie or Jacqueline but she got to name my sister and my brother, so my dad and my brother insisted on naming me. And they were big fans of 'The Little Mermaid

I have two lovely parents who support everything I do, two siblings, and three beautiful nieces. My house is always filled with laughter and fun

Female empowerment really is important to me. I'm a big nerd of the books from the 15th Century and 16th Century, when the men had all the power and the women had none of it.

Who is Ariel Winter?

Ariel Winter is one of Hollywood’s most promising young talent with notable roles both in television and film. She is an American actress, voice actress, and singer.

She is known for her role as Alex Dunphy in the comedy series Modern Family, as well as the voice of the title character in the Disney Junior show Sofia the First.

Winter was born in Los Angeles, California, The daughter of Chrisoula and Glenn Workman. She is the sister of actors Shanelle Workman and Jimmy Workman. Her mother’s family is Greek, while her father is of English and German.

Ariel Winter graduated from Campbell Hall School, a private high school in Studio City, California. After that, she attended college at the University of California, Los Angeles  (UCLA).

Ariel Winter started her career in the entertainment industry in a Cool Whip commercial advertisement in 2002 when she was 4 years old. She had her first television role in an episode of Listen Up and followed it with appearances in a variety of shows such as Freddie, Monk, Bones, and ER.

She has continued to work in TV animation, including providing the voice of Marina the Mermaid on Disney Junior’s Jake and the Never Land Pirates. In 2012, Winter was cast as Sofia, the lead character in a then-new Disney animated franchise Sofia the First. The series premiered in January 2013 on Disney Junior. She also lent her voice to characters in the animated films, Disney’s Bambi and Blue Sky’s Ice Age: The Meltdown.

Ariel Winter has appeared in feature films, most notably in Kiss Kiss Bang Bang, Speed Racer, Duress, Opposite Day, and Fred 2. For her leading role in the film The Chaperone, she was nominated for the Young Artist Awards 2012 as Best Actress in a Motion Picture. Winter and her Modern Family castmates have won four Screen Actors Guild Awards for Best Ensemble in a comedy series.

In the 19 years old Ariel Winter is rumored to have a new, cute bae. And, strangely, he looks an awful lot like her ex-love.

Actress Ariel Winter trolled for asking donations from her fans for her cousin’s health bills!