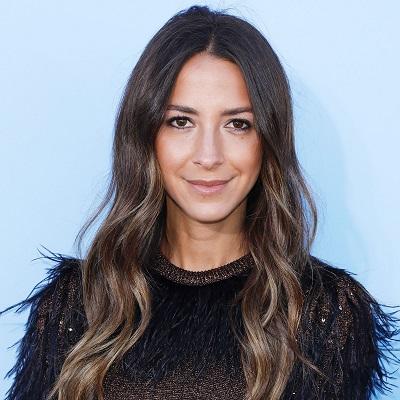 What is the relationship of Arielle Charnas?

The wedding took place on the 18th of October 2014 at Fisher Island, Florida. In the white-theme wedding ceremony, the fashion blogger wore a flowing gown designed by her and Christian Siriano.

In the ceremony, she had a cluster of white-and-plum Casablanca calla lilies as her bouquet. Her sisters, Danielle, and Michaela accompanied her as the maids of honors. Also, her cousin, Jenna was the bridesmaid.

The wedding was celebrated on the evening of the day with the four-tiered cake topped with fresh calla lilies and dinner. Finally, the celebration ended with fireworks.

Together, the couple is blessed with two children including two daughters Ruby Lou and Esme Rae. As of now, Arielle is enjoying her days as a mother.

Who is Arielle Charnas?

Arielle Charnas is a fashion blogger and Instagram Influencer. She is renowned for her blogging style in the Something Navy.

Also, she is a fashion designer who designed a line of apparel for the departmental store, Nordstrom.

Arielle Charnas was born on the 13th of June 1987 in New York City, NY. Her birth name is Arielle Noa Charnas.

Till the date, she has not shared any details about her mother and father. Her elder sister, Danielle Nachmani and Michaela are of Jewish-Ashkenazic ethnicity.

Talking about education, she graduated from Syracuse University in Syracuse.

Back in 2009, Arielle Charnas started her fashion blogging with the name, Something Navy. She never intended to pursue blogging as her career. At the time, she worked in the fashion house, Theory store at Meatpacking District.

With the passing of time, her fashion blogs went instant hit with millions of views. In 2016, she signed four years contract with TRESemmé and various shampoo brands.

Besides that, she started posting her pictures on her Instagram posts too which gripped the attention of many viewers making her an Instagram star.

Her Instagram posts are popular in such a way that her Instagram story promoting the activewear of the brand, Bandier caused sales of $207,000 in four hours.

She further expanded her career as a fashion designer too. In fall 2017, she launched her first collection with Nordstrom. The fashion line was named Something Navy X Treasure & Bond. The fashion line had million-dollar sales within 24 hours.

Through her career as a blogger and influencer, she has made a net worth of $6 million as of 2022. Her earnings as a fashion blogger are in the range of $20k to $51k.

Recently, the fashion blogger faced a backlash from her fans and followers as she tested positive for COVID-19. Instead of self-isolating herself from friends and family, she was making TikTok videos with them.

Also, she traveled to the Hamptons and did not practice social distance.

The dispute further goes on when she revealed that she didn’t go through any sort of procedure to take COVID-19 tests. Also, she shared that her doctor’s friends ended up testing her.

After the controversy, the department store, Nordstrom disassociated itself with this fashion blogger.

Arielle Charnas is a brown-eyed brunette. She stands at a decent height and weight. Details regarding her body measurement are not available yet.