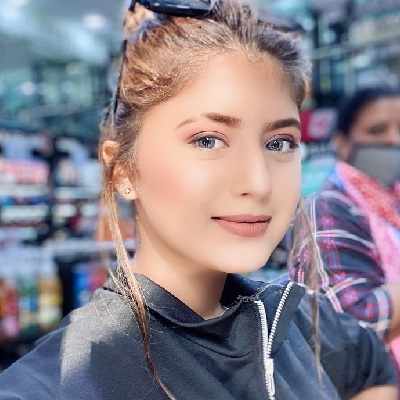 Arishfa Khan is possibly single. To date, she has not introduced anybody as her boyfriend or lover.

There were rumors that she was dating the late YouTube Danish Zehen. However, she confirmed that all the rumors were fake.

Who is Arishfa Khan?

Indian Arishfa Khan is an actress and model. Khan is renowned as Gurmeet Chatwal in the TV series, Papa by Chance.

Last, in 2020, she appeared in the video song, Teri baatein Mulaqtein: Raj Barman along with Rohan Mehra.

Arishfa Khan was born on 3rd April 2003 in Shahjahanpur, Lucknow. Her birth name is Sayyed Arishfa Khan. She is of Far-East-Asian ethnicity with Indian-Muslim roots.

She is the daughter of Arshi Naaz (mother) and Rashid Khan (father). She has an elder sister named Arisha Khan.

Moving to her academics, she completed her schooling at the Ryan International School in Mumbai.

In 2012, she made her acting debut with the Indian TV serial name, Ek Veer Ki Ardaas…Veera as Gunjan. In the series, her acting was widely appreciated. Despite her popularity in the serial, she didn’t get any TV project soon.

Following that, in 2018, she featured the TV series, Papa by Chance in Gurmeet Chatwal. The show was premiered on the Channel, Star Bharat. In the character, she portrayed the character of Zebby Singh, an adoptive daughter of Yuvann Chopra.

Following that, she made her appearance in short videos like Mamta Sharma: Yaara 2 and Teri baatein Mulaqtein, The video, Teri Baatein Mulaqtein around more than 9.3 million views.

Besides acting, she was extremely popular on TikTok until the app was not banned in India.

Besides that, she has makes from her appearances in Indian music videos. Through her YouTube channel, she makes in the range of $15.7K – $251.4K.

She has black eyes with black hair. She stands at a height of 5 feet and 5 inches and weighs around 50 kg.

Back in 2019, she came into the headlines for her controversial allegation. She accused her Indian YouTube star, Danish Zehen’s elder brother, Guffran was harassing her and her family members.

She mentioned that due to the harassment, her mother mostly hanged herself. In the nick of the time, his father saved her mother during the incident.

Also, she runs a self-titled YouTube channel with 2.13 million subscribers with 130.7 million views.