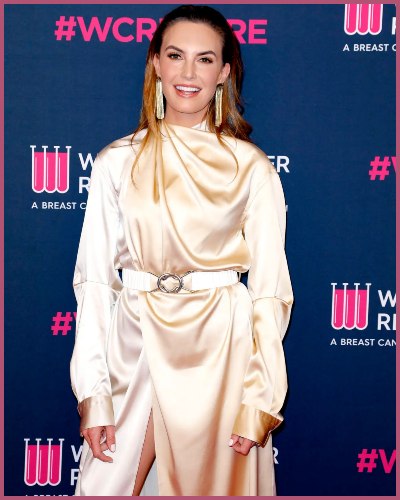 Elizabeth moves on from Armie with a new man. source: Page Six

Elizabeth Chambers has moved on from her estranged husband Armie Hammer

Elizabeth Chambers is no longer mourning her relationship with her estranged husband Armie Hammer.

The journalist made her relationship with the mystery man Insta-official on Friday.

The sweet photo consisted of Polaroid selfies of her with her probable new beau on the beach in the Cayman Islands.

The 40-year-old captioned the picture:

The host did not tag her new apparent man who looked dashing in a messy man bun in the pictures. Her friends supported the new relationship with comments full of love and support.

Her friend Catt Sadler wrote in the comments:

“happy for you my darling girl ♥️.”

The romantic post comes just two months after she reunited with her former husband Armie in Los Angeles.

The disgraced actor has been living at Robert Downey Jr.’s home where he has been financially supporting the actor after he faced banishment from Hollywood.

After nearly a decade of marriage, Chambers filed for divorce from the Call Me By Your Name star in 2020 after his cannibal scandal became public.

He was also accused of raping a woman called Effie.

Also, Read Who is Elizabeth Chambers dating after split from husband Armie Hammer?

Later he also lived there with Elizabeth and their two children, Harper, 7, and Ford, 5.

After the scandal, the star moved to California once the whole knew his act.

“I can’t confirm or deny the report because Armie hasn’t addressed it,”

“I just think it’s s–tty that, if he is selling timeshares, the media is shaming him for having a ‘normal job.’”

Armie’s alleged victims including Courtney Vucekovich, Paige Lorenze, and Julia Morrison have explained their bitter experience with the movie star in a documentary series called House of Hammer.

They also shared screenshots of troublesome messages and voice notes that he sent them.

One of the messages read:

“I have a fantasy about having someone prove their love and devotion and tying them up in a public place at night and making their body free use,”

Hammer, on the other hand, has called all allegations against him bullshit.

Also, Read Yet another accusations on Call Me By Your Name actor Armie Hammer? Was he cheating on wife Elizabeth Chambers?