Updated On December 18, 2022 | Published By: Marchas De
Share this
In Relation 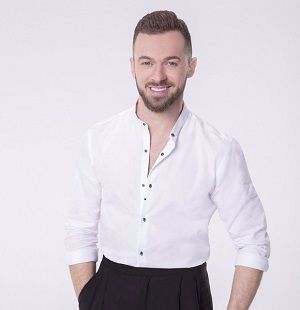 Performing to a live audience is the ultimate experience for a dancer, their reaction to the dance is what makes it so special

Performing on Strictly is indescribable, it is everything a dancer could wish for.

why change something when it really works.

What is the relationship of Artem Chigvintsev?

They are parents of a baby boy, Matteo born on 31st July 2020. Further, they revealed that they are planning to get married on Thanksgiving 2021.

Dancing with numerous stars, Artem was married to ballroom dancer Giselle Peacock from 2004 to 2005.

After their split, Artem dated Dancing with the Stars judge Carrie Ann Inaba for two and half years and then actress Kara Tointon from 2010 to 2014. Artem then was in a relationship with Torrey DeVitto but the couple split in May 2017, after almost a year of dating.

Who is Artem Chigvintsev?

Artem Chigvintsev is a professional dancer who is specialized in Latin dancing.  Being crowned series champions for 2010, He is one of four professionals to win the Strictly Come Dancing series as a first-time strictly pro. Besides, he has also appeared in music videos and acted in a few shows.

His works on La La Land (2016), Shine (2017), and The O.C (2006) are well-known. He currently appears on Dancing with the Stars and has toured with the Dancing with the Stars live show. He has his name in the Guinness Book of Records, having taken part in the ‘It Takes Two’ challenge for the most Botafogo steps in 30 seconds and he managed to have 79 – a new World Record.

What are the birth facts of Artem Chigvintsev?

Artem Chigvintsev was born on 12 June 1982, in Izhevsk, Udmurt Republic, RSFSR, Soviet Union. His birth name is Artem Vladimirovich Chigvintsev. He is Russian. He was born and raised in Russia, but currently, he resides in Palo Alto, California. Winning numerous dance competitions in Russia he moved away at 15 to gain more training in Germany, Italy, and England.

Artem was not much serious in his education because of his dedication to dancing. Therefore, he also learned salsa. He inherited his love of dance from his mother, taking dance classes from a young age. Winning numerous dance competitions in Russia he moved away at 15 to gain more training in Germany, Italy, and England.

He moved to the United States in the year 2003 and started as a dancer. Although being a tough contestant within the very first series of the popular dancing show “So You Think You Can Dance” he did not win the contest and got eliminated after some rounds and returned as a guest choreographer for season 2.

Artem’s parents were also running a dancing institute. Therefore, he was highly influenced by his family background. He also undertook various acting and choreography roles, appearing in ‘The O.C.’, the 80th Oscars ceremony, and being one of the professional dancers on the US version of Strictly – ‘Dancing With The Stars. Artem joined the company of a major touring dance show and traveled extensively performing on Broadway and in the West End.

He is currently seen on Season 24 of Dancing With The Stars, with his celebrity partner Nancy Kerrigan.

His salary has not been disclosed. Although he has accumulated a Net worth of 6 million dollars as of 2022.

Is Artem Chigvintsev involved in any rumors and controversies?

He stated the reason for leaving Strictly come dancing to be BBC kept changing producers and executive producers of the show. I think that was the biggest determination why I wanted to leave the show. He added that everyone was trying to bring something new and trying to change it. He said he has always been a big believer in not trying to change something that is working well.

Artem Chigvintsev is 5.7 ft tall and weighs 75 kgs (165 pounds). He has grey-colored eyes and light brown hair. Being a dancer he has maintained a good body physique.