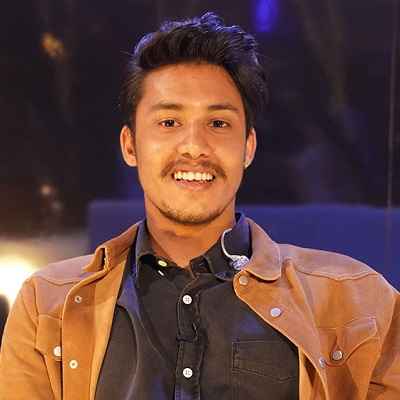 Arthur Gunn is possibly single. He has kept his personal life private as he has not opened up anything regarding his romantic connections.

Without any indication about his relationships, his silence has surely caused the public to believe that he is single and is not dating anyone.

Who is Arthur Gunn?

Arthur Gunn is a Nepalese-American singer-songwriter from Wichita, Kansas who rose to national fame in 2020 as the runner-up finalist on the eighth season of the singing reality show American Idol.

Talking about his nationality, he holds a Nepalese identity. His birth name is Dibesh Pokhrel, known mainly by his stage name Arthur Gunn.

He was born to parents Datram and Maiya. However, he was socialized to music at a young age and grew up with it in his life.

He has three sisters named Rubi, Rupa, and Supriya who were not musical, they noticed that as a child he sang and played miniature guitars his mother gave him. His family used to listen to records and play music, and he wanted to do the same.

His family moved to Wichita, Kansas when he was eleven years old, but he stayed and completed his education.

After graduating from high school and accompanying his sisters who were attending school in the United States, he went to Wichita, Kansas in 2014, where he was introduced to bluegrass and country music.

Gunn began recording songs in 2018 and began utilizing his stage name around the same time. In early 2018, he published Grahan, an eight-song Nepali language album that includes the love song “Nyano Ghar.”

He went on tour throughout Nepal to promote the album, and he recorded new songs in 2019, including “Ma,” “Khoj,” and “Karnali (The River),” all of which will be included on a new album.

Gunn knew he wanted to be a professional singer-songwriter and believed that auditioning for American Idol would be a wonderful way to learn more about the industry from his musical friends.

Gunn auditioned for American Idol in 2019 online and was invited to the in-person Wichita auditions on September 4 for the third season of the relaunched edition.

Arthur is also one of several dozen contestants featured in a February 2020 American Idol commercial that debuted during the Academy Awards and went into “heavy rotation.”

The commercial pays homage to a scene in Almost Famous (2000) in which AI host Ryan Seacrest drives a bus full of contestants singing along to Elton John‘s “Tiny Dancer.”

Also, Gunn became the show’s first Nepali-born Top Ten contender in May 2020, with a reggae version of John Denver’s “Take Me Home, Country Roads” for the show’s subject of invoking songs of home.

The top five, including Gunn, were announced live from the Top Seven for the live finals, and they performed two rounds of songs while East Coast fans voted for their favorites during the performance. The first round had Gunn performing Gavin DeGraw’s 2003 track “I Don’t Want to Be.”

Furthermore, Gunn was one of the featured singers in a virtual arts event given by the US Embassy in Kathmandu in June 2020.

In July 2020, he released Self-Titled, a seven-song album produced by Angelo Rodriguez.

Being a popular singer, Arthur Gunn has an estimated net worth of approx $50k, while his exact salary. income and earnings are still under review.

He makes a good and comfortable living from his earnings. Apart from this, he makes earnings from his Youtube channel named Arthur Gunn [OFFICIAL].

Owing to his professional career, Arthur hasn’t been a part of any kind of controversy yet.

He has maintained a healthy distance between his professional and personal life and appears to be avoiding unwanted scandals and rumors.

Arthur Gunn is 5 feet 6 inches tall and weighs around 65 kg. Furthermore, no information about his other body statistics is available.

Similarly, he has brown eyes and light curly black hair.

Likewise, his Facebook page is enriched with over 202k followers.

Moreover, he owns his own Youtube channel named Arthur Gunn [OFFICIAL] where he has gained 487k subscribers. He created this channel on July 25, 2017.

As of now, he has uploaded 44 videos on his channel.