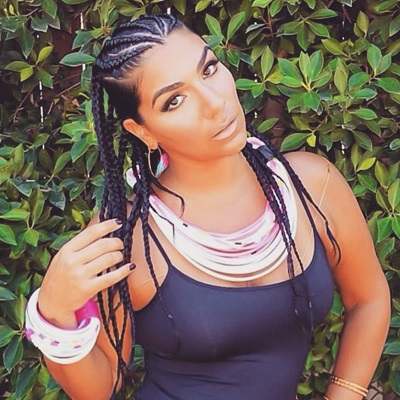 Asa Soltan Rahmati is in the relationship with Jermaine Jackson Jr. Her Boyfriend, Jermaine is an actor by profession.

They first started dating each other in 2010. The couple is blessed with a son, Soltan Jackson. They welcomed their boy on the 20th of January 2018

Who is Asa Soltan Rahmati?

Iranian-American Asa Soltan Rahmati is a TV Personality and artist. Rahmati is renowned for the reality TV show, Shahs of Sunset.

She is the founder of Diamond Water. Also, she is a singer.

Asa Soltan Rahmati was born on the 1st of September 1976 in Ahwaz, Iran. She is a Persian ancestry.

She has a brother, Arta.

Her family left Iran when she was young as a political refugee and went to Europe where she grew. Later, they moved to the United States. At the time, she was a teenager.

She attended the University of California, Los Angeles. From the university, she earned a double degree in Psychology and Philosophy.

– Asa started her career as a singer. During 2004, she was active in the different shows and events as a singer.

– After that, in 2012, she made her appearance in the Bavo’s TV show, Shahs of Sunset as a member of the show. The show is based on the lifestyle of the Persian-American personality who is currently living in Los Angeles and trying to maintain their life in America preserving their traditional values.

– After gaining huge popularity as a TV personality, she lunched her Diamond Water. The bottled water with alkaline water is put in contact with the diamond before being bottled. Also, she released her songs including Gold and Tehraneles.

– Apart from Shahs of Sunsets, she also featured the TV series like Watch What Happens Live with Andy Cohen, The Shahs Come Clean with Nadine and Big Morning Buzz Live.

– Asa is also a painting artist. International Museum of Women published her painting in the art book, Imagining Ourselves in San Francisco.

Besides that, she also earns as a singer. Also, she makes through her business ventures like Diamond Water.

Asa is Trying To Limit Her Personal Life

The TV Personality of the Shahs of Sunset is repeatedly accused by her fellow cast member to keep her personal life a mystery.

The TV actress is in the relationship with Jermaine Jackson Jr. Despite that, his appearance in the show is very less. Also, his appearance was considerably less during the pregnancy period of Asa during the 6th season of the series.

She has black eyes with black hair. Her height is 5 feet and 7 inches.