Asher Angel is an actor. Asher is dating a girl named Caroline Gregory.

Cute and adorable Asher Angel is in a relationship with Caroline Gregory. Asher and his girlfriend Caroline enjoyed skating in The Cooler – Alpharetta Family Skate Center and welcomed New Year 2021.

Previously, he had an affair with Peyton Elizabeth Lee. She is an actress.

Asher revealed that he was Peyton’s fan after watching her show and gradually they became friends. Now, their friendship has turned into a healthy relationship. However, the couple broke up in 2019. 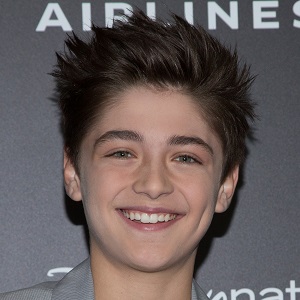 Who is Asher Angel?

Asher Angel is an American child actor. He is best known for his starring role as Jonah Beck in the TV series Andi Mack (2017-present). Asher has performed in more than 10 theater productions. He is also known for playing the character Brad Jr. in the film Jolene (2008).

Asher Angel was born on September 6, 2002, in the United States of America. His birth name is Asher Dov Angel. His mother’s name is Coco Angel and his father’s name is Jody Angel.

He has two younger siblings named Avi Angel and London Angel. Asher is an American by nationality and he is of English ethnicity.

He had an interest in acting since his early childhood age and he has a dream of becoming a professional full-time actor in his future.

Asher began his acting career at a very young age. He has been active in theater and has performed in more than 10 productions put on by the Desert Stages Theater. He made his screen acting debut playing Brad Jr. in the 2008 film Jolene. In 2014, he played the character Danny in the film Hate from a Distance.

He rose to a wide audience when he was cast as Jonah Beck in the TV series Andi Mack in 2017. Asher has appeared in 14 episodes of the TV series till now. He has also appeared as a guest on the shows Criminal Minds: Beyond Borders and Nicky, Ricky, Dicky & Dawn.

He has a height of 5 feet 3.5 inches with body weight 58 kg. He has dark brown hair color and his eye color is black.