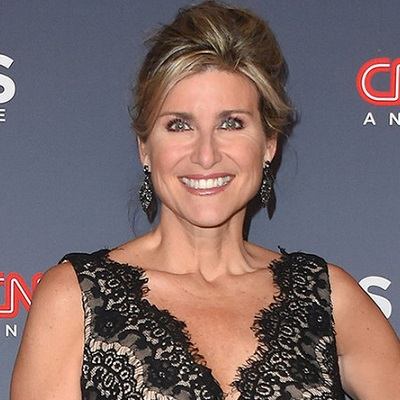 We didn't see what happened after mortars landed, only the puff of smoke. There were horrors that were completely left out of this war. So was this journalism? Or was this coverage?

I'm not sure Americans are hesitant to do this again - to fight another war, because it looked to them like a courageous and terrific endeavor.

I've had some of the best and most traumatizing experiences at NBC.

Ashleigh Banfield is married to her boyfriend, Chris Haynor. The couple married on the 29th of December 2017. The wedding took place at the Hermitage Club ski lodge in Wilmington, Vermont.

Previously, she was married to Howard Gould. Her ex-husband, Howard is a real estate financier. Also, he happens to be the founder of the carbon credit trading company, Equator Environmental. They married on the 24th of July 2004 at Royal Lake of the Woods Yacht Club in Canada.

Together, the former couple has two sons; Jay Fischer Gould and Ridley Banfield Gould. The couple got separated from each other via divorce.

Who is Ashleigh Banfield?

Next, she will host the TV program, Judgment With Ashleigh Banfield. The TV program will first air on the 20th of September 2020.

Banfield was born on the 29th of December 1967 in Winnipeg, Manitoba. Her birth name is Ashleigh Dennistoun Banfield. She is of British-Irish ethnicity.

She is the daughter of Suzanne Elizabeth Holland and John Alexander Banfield. She has a brother. He works in Alaska.

She completed her High School education from the Balmoral Hall School in her hometown, Winnipeg. Later, she moved to Kingston and attended Queen’s University. From the university, she graduated with Honors in Political Science and French.

Moving forward, she joined the University of British Columbia where she continued studying French.

In 1988, Ashleigh Banfield started her career with the TV station, CJBN-TV in Kenora as a reporter. The same year, she also joined CKY-TV in Winnipeg. In 1989, she started anchoring the CFRN-DT at the weekend. She worked for the network for three years till 1992.

After that, she joined CICT-TV. In the first year, she worked as a producer. Later, she became an evening news anchor and business correspondent for the firm. In the time interval, she also worked as a freelance associate producer for ABC’s news program, World News Tonight.

In February 2005, she joined the Court TV as anchor, creator, and producer. Also, she co-hosted the Banfield & Ford: Courtside.

In 2012, she joined CNN and co-anchor the morning show, Early Start along with Zoraida Sambolin. Later, she joined CNN’s sister station, HLN, and hosted the interview program, Primetime Justice with Ashleigh Banfield.

Next, she will be hosting the TV program, Judgment with Ashleigh Banfield for Court TV.

Ashleigh Banfield has blue eyes with blonde hair. She stands at a height of 5 feet 10 inches and weighs around 62 kg. Her body measurements are 35-27-35 inches.

In 2018, she came in the headlines when she questioned #Me too or Too Far? At the time, an anonymous 22 year-girl stated he violent sexual experience with the actor, Aziz Ansari via Babe.net.

In the interview, she mentioned if the people are engaged in speed dating than such events will take place.

During the interview, she especially mentioned that she is not defending the actor.

You may also read the bio of Adam Fleming, Anne Thompson, and Carol Silva.

Who is the best kisser according to the supermodel Paulina Porizkova?