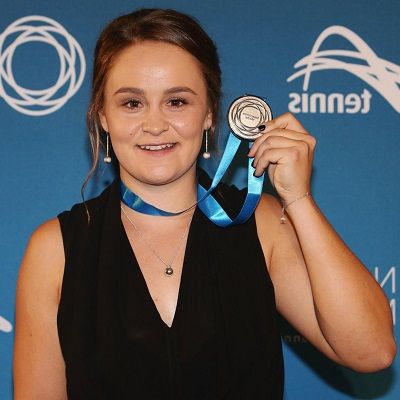 There's no need to look too far into the future or the past, enjoy the moment

My Indigenous heritage is something I hold close to my heart

If I win, it's a bonus, if I lose, the sun still comes up the next day, and it's all good.

I've played Petra a number of times this year. Each match has been exceptionally tough. We've kind of split them a little bit

Ashleigh Barty at present is engaged to Garry Kissick. The couple engaged in November 2021.

Her fiance Garry Kissick is a golf player and PGA trainee professional at the Brookwater Golf & Country Club in Brisbane.

Who is Ashleigh Barty?

Ashleigh Barty is an Australian Grand Slam Winner. She is Australia’s No.1 tennis player. She is also the winner of the 2019 French Open.

Ashleigh Barty was born on 24 April 1996 in Ipswich, Queensland, Australia. She belongs to the Ngarigo Indigenous Australian heritage. Moreover, her Zodiac Sign is Taurus.

Her father is Robert Barty and her mother is Josie Barty. Ashleigh’s father works in the government whereas, her mother works as a radiographer.

In addition, she grew up with her sister Sara and brother Ali Barty in Springfield, Ipswich, Queensland.

Barty began playing tennis at the age of four in nearby Brisbane.

Ashleigh had a promising start as a junior. In 2011, she ranked No. 2 in the world after winning the Girls’ Singles title at Wimbledon.

In 2013, when she was just 16, she finished as a runner-up at three Grand Slam doubles events. Her partner was veteran Casey Dellacqua.

Later in the 2014 season, Barty decided to take an indefinite break from tennis.

Ashleigh signed with the Brisbane Heat for the inaugural Women’s Big Bash League season despite having no formal training in the sport.

In early 2016, although she won her first tournament back on the ITF circuit. In this tournament, she had an arm injury.

She had another prolific year with Dellacqua, culminating in her first appearance at the WTA Finals in doubles.

She is among the top 20 players in doubles, having achieved a career-high ranking of No. 5 in the world.

During her Junior career, 2010-2014, she claimed the title of Female Junior Athlete of the Year for four consecutive years.

In 2017 and 2018, she won the Newcombe Medal Awards. Recently in 2019, she received The Don Award and she also was the Australian Women’s Sportswoman of the Year.

In 2018, she won her first Premier Mandatory and Grand Slam Tournament and repeated that again in 2019.

She has an estimated net worth of $ 4 million USD.

Barty, 23 is also called one of the richest tennis players in 2019. During WTA Finals, she was awarded the prize money of $10.93 million.

Her income is estimated to be $1.45 million per week in Shenzhen and in case she wins, it would be $5.98 million.

Ashleigh is a brunette with dark eyes. Her height is 5 ft 5 inches and her weight is 62 kg. Her body stats are 36-28-38 approximately.

You may also like to read about Steffi Graf, Dominic Thiem, and Rod Laver.

Does Ashleigh Barty have any children?

She has not welcomed any children yet.

Is Ashleigh Barty having an affair?

At present, she is dating a golf player, Garry.

What is the age of Ashleigh?