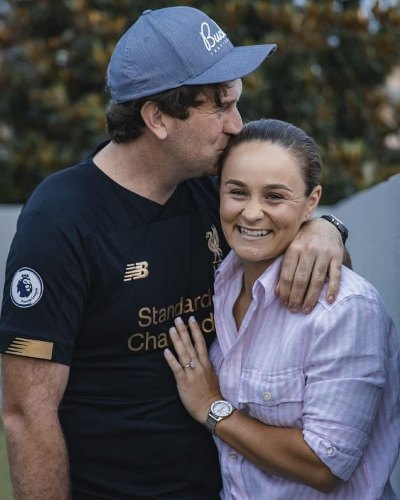 Ashleigh Barty is officially engaged! Her fiance Garry Kissick proposed to Ashleigh and announced their engagement. He proposed to her a week ago and she said yes to him. They have been dating each other for four years before taking it to engagement. Barty shared the engagement news on Instagram showing off her beautiful ring.

Likewise, they were photographed together after she won three-set over Karolina Pliskova in the Wimbledon women’s final. After announcing the engagement, the pair were congratulated by friends and family.

How much is Ashleigh Barty’s net worth?

Ashleigh Barty has an estimated net worth of $16 million as per Celebrity Net Worth. She made her single debut at the WTA Finals and was awarded $4.42 million which was the largest sum of prize money in tennis history. She is the National Indigenous Tennis Ambassador for Tennis Australia.

“It’s my home. I have grown up here and my close family all live in the area. There are great cafes, parks and a golf course. It doesn’t matter where I am in the world, I love coming home.”

Ashleigh Barty is an Australian Grand Slam Winner. She is Australia’s No.1 tennis player. She is also the winner of the 2019 French Open. Read more bio…