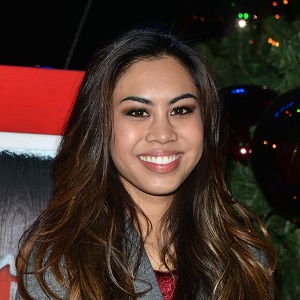 Ashley Argota is an unmarried till now. She doesn’t have a long list of boyfriends. In 2007, she began dating famous American baseball player Trevor Brown. They broke up in 2009. After that, she began dating famous American actor Nathan Kress in 2009. The couple broke up after short-term relationship in 2010. Since then, she has not been in any known relationships till now. According to the records, she is possibly single at the present time.

Who is Ashley Argota?

She is also popular for playing Kelly Peckinpaugh on the Nickelodeon sitcom Bucket & Skinner’s Epic Adventures from 2011 to 2013. Since 2014, she portrays the character Lucy Chan on the American family drama television series, The Fosters.

Ashley Argota was born on 9 January 1993, in Redlands, California, USA. She is an American by nationality and belongs to Filipino ethnicity.

Her birth name is Ashley Spencer Taylor Villegas Argota. She is the younger of two daughters of Filipino parents.

She completed her high school education from Connections Academy, an online virtual high school. After that, she enrolled at New York University. At the University, she attended her first semester at the College of Nursing.

Ashley began her career in 2003, as a contestant on the American CBS television show, Star Search. She began her career as an actress in 2007. She made her acting debut in the 2007 independent film Schooled, playing Soomi Alverez. The following year, she was cast as Kathy on the Nickelodeon comedy television series True Jackson, VP. She portrayed the role from 2008 to 2011.

She played the female lead character Kelly Peckinpaw in another Nickelodeon comedy series Bucket & Skinner’s Epic Adventures. She appeared in the series from 2011 to 2013. Ashley also completed contestant on the game show BrainSurge in 2010. However, she lost the competition. After that, she appeared again in 2011 and won the competition.

Ashley played the recurring role of Taylor in the TV series Lab Rats from 2014 to 2015. Since 2014, she portrays the character Lucy Chan in The Fosters. She recently appeared as a guest in Snatchers. She plays the lead role as Abigail Abaya in the series Liberty Crossing since 2017. In addition to acting, she is also a singer. She is famous for her two independent albums Dreams Come True (2006) and Ashley (2008).

Ashley Argota: Salary and Net Worth

Her net worth and salary are unknown.

In April 2016, Ashley faced a wardrobe malfunction while attending the Los Angeles premiere of “Mother’s Day”. She made the headlines for going braless for the occasion. And sadly, she paid the consequences for it. Many social media users and her fans criticized her for the act. Luckily, she found humor in the situation, and said, “I literally saw the pictures on Twitter start coming up, and I literally started laughing.” She then added, “I was like, ‘Of course this would happen to me!’ Like, of course. But it’s just one of those things that you have to laugh at. It’s so ridiculous.”