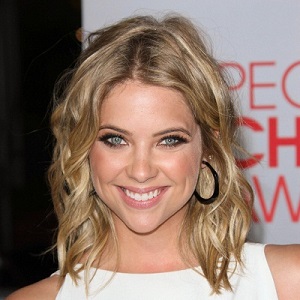 I had a gothic phase, and now I'm more edgy chic

I don't think I could live with anybody. I had roommates, and it's not for me. I like my space.

What is the relationship of Ashley Benson?

Ashley Benson is an unmarried actress now. She dated Justin Thorne from 2008 to 2009. After that, she was in a short-lived relationship with actor Chord Overstreet.

After the split with Ryan, Ashley opened up that she is a lesbian. Ashley then was seen holding hands in public with Cara Delevingne. They were spotted after the date in bar Lucky Strike, New York.

As of now, she is dating with G-Eazy. The two first linked in May 2020, spotted holding hands and kissing together.

The following year they split up, however, have gotten back together now nearly one year after first breaking up.

Who is Ashley Benson?

Ashley Benson is an American actress and model. She is best known for her role as Hanna Marin on the teen drama television series Pretty Little Liars (2010-present).

She is also famous for playing the character Mia Torcoletti in the series Eastwick (2009-2010). Benson is the winner of the Young Hollywood Award in 2011 with the cast of Pretty Little Liars.

Ashley was born on 18 December 1989, in Long Beach, California, USA. Her full name is Ashley Victoria Benson. She is the daughter of Shannon Harte(mother) and Jeff Benson(father).

She has an older sister named Shaylene Benson, who previously was a cheerleader for the LA Lakers. Moreover, she does not have any brothers.

Ashley is an American by nationality and she is of English, German, Irish, and Danish ethnicity. She started dancing competitively in ballet, jazz, hip-hop, and lyrical at age four.

She also enjoys singing and has appeared in several musicals. At age four, she was asked to audition to sing a solo at four Christmas services at her church. She has attended Orange County School of the Arts.

Ashley began her career as a model in dance catalogs when she was five years old. She appeared in several musicals by the age of eight.

After that, she began modeling under The Ford Modeling Agency in print advertisements. She also appeared in a Lil’ Romeo music video as a schoolgirl in 2002.

Ashley Benson made a brief appearance in the Zoey 101 episode “Quinn’s Date” in March 2005. Benson has also appeared in the music videos “That Girl”, “BlackLight”, and “Honestly”.

She made her acting debut in the TV film Nikki in 2002. In 2004, she signed a three-year contract with the NBC daytime soap opera Days of Our Lives.

Ashley Benson began playing Abigail Deveraux on Days of Our Lives on November 12, 2004 and appeared in the series until 2007.

In 2008, she appeared in the film Fab Five: The Texas Cheerleader Scandal, where she played head cheerleader Brooke.

Benson starred in ABC’s 2009 television series Eastwick as Mia Torcoletti. She portrayed the role until 2010.

In December 2009, Benson was cast as Hanna Marin in the mystery-thriller teen drama series Pretty Little Liars. Since then, she portrays Hanna in the series and has appeared in 165 episodes till now.

She won the Young Hollywood Awards and Youth Rock Awards in 2011 for her role in Pretty Little Liars.

How much is the net worth and salary of Ashley Benson?

As per the sources, she has a net worth of $6 million. But there is no information about her salary and income.

Currently, there are no desperate rumors regarding her personal and professional life. Ashley became a part of a controversy in 2013 when she poked fun at Amanda Bynes with an Instagram picture imitating the mentally troubled actress.

What are the body measurements of Ashley Benson?

Her eye color is blue and her hair color is blonde. She wears a shoe size of 8 (US) and the dress is a size 6 (US).

12 Snapchat Username Of Celebrities From Kendall Jenner To Ashley Benson