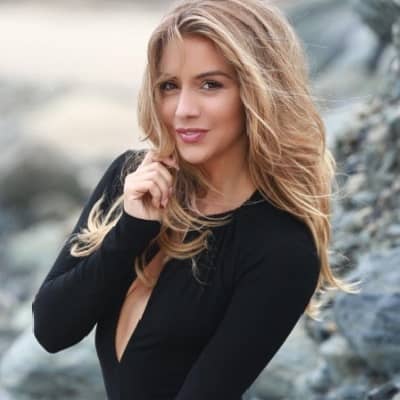 Ashley Kelsey is currently in a relationship. She is having an affair with a sports player Kerryon Johnson. The details about their affair are unknown. But this couple will soon welcome their first child.

On 30 Dec 2020, Ashley shared a picture on Instagram where she is holding her boyfriend’s and is showing her baby bump.

She was dating a guy named Dario Medrano. Her ex-boyfriend is a TV star and was featured in the TV show The Challenge.

This couple started dating each other in 2017 but are now separated. Before this, Ashley was seen dating TV star, Zach Nichols.

Who is Ashley Kelsey?

Ashley Kelsey is an American reality TV personality. She has participated and won Battle of the Seasons in 2012.

Moreover, she was seen competing in The Real World: San Diego (2011), The Runner, and Meta Mogul Runner.

She was born as Ashley Marie Kelsey on 03 Aug 1986 in the United States. The identity of her father is unknown and her mother’s name is also unknown.

Ashley belongs of Caucasian descent. Regarding academics, she attended the University of Connecticut and achieved a bachelor’s degree in business technology and marketing.

Ashley Kelsey has appeared in several reality TV shows. She was seen in Real World: San Diego which is an MTV show. In it, contestants from different places came together to live in a home.

She was also seen in The Challenge: Battle of the Seasons (2012). This is the 23rd season of The Challenge series and was filmed in Turkey and Namibia.

Ashely was in a team named San Diego and the other members were Frank Sweeney, Sam McGinn, and Zach Nichols. This team won the season and teams like Las Vegas and Brooklyn came in 2nd and 3rd place respectively.

She holds an estimated net worth of $1 million as of the year 2021. This star has received an amount of $62,500 by winning The Challenge: Battle of the Seasons.

She was also associated with a brand named Esmi Skin Minerals. Some popular TV star’s net worth is,

This TV star is at present keeping herself away from rumors or any desperate scandals.

Regarding Ashley Kelsey’s body features, her height and her body weight are average in size. Moreover, the color of her eyes is brown and her hair is blonde.

Ashley is available on social sites. She started to use Instagram and is now popular on it. Her account has over 115k followers.