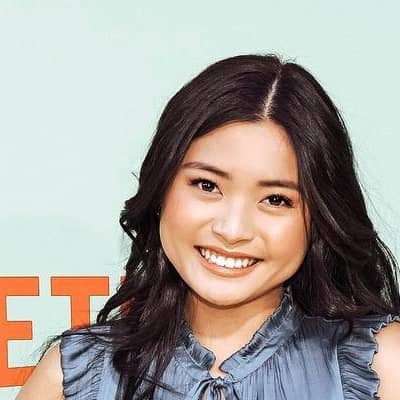 Ashley Liao is currently in a relationship with a guy named Noah Cook. He is a game analysis. The couple met in March 2020 and started dating each other.

Ashley had posted the picture of her boyfriend for the first time on the 6th of September 2020. Since then she has been uploading the pictures together.

Who is Ashley Liao?

Ashley Liao is a Chinese-American famed actress. She is best known for her role as Lola Esther Wong in the Netflix series Fuller House.

Ashley was born on October 21, 2001, in Orange Country, California. Her full name is Ashley J. Liao. She holds an American nationality and belongs to the Asian ethnicity.

Talking about her family members, Liao hasn’t yet disclosed her parent’s and sibling’s identities in the media.

Similarly, her academic details are also under the curtains at the moment. However, she took improv classes at Second City in Hollywood, California. When she was in the fifth grade, she joined local musical theater production. She acted the character of “Dorothy” of The Wizard of Oz in her second-ever production.

Ashley made her television debut in the year 2014 with a guest appearance in an episode “Nix the Fat Week The Kicks” of Bad Teacher. That year, she also appeared in the TV movie, Fatrick where she portrayed the role of Young Barbara Wu.

In 2016, she landed the role of Many in Disney XD film Jessica Darling’s It List. In the same year, she appeared as a guest star in three drama series titled Fresh Off the Boat, Nicky, Ricky, Dicky & Dawn, and The Kicks. Following that, she rose to stardom after portraying the role of Lola Wong in the Netflix series, Fuller House. She appeared as a recurring character for seasons 1 and 3 but was promoted to series regular for season 2.

Ashley was nominated for the Young Entertainer Awards in the category of Best Supporting Young Actress for the television series Fuller House in the year 2017.

To date, Liao has managed to maintain a clean profile. She hasn’t been surrounded by any sorts of rumors and disputes that could hamper her personal and professional life.

Ashley has earned an impressive amount of wealth throughout her successful career as an actress. Besides, she has done various endorsements for top brands and companies. As of now, she has an estimated net worth of around $300 thousand.

However, her salary, assets, and other income are still under review.

The actress has a maintained body posture. She stands at the height of 5 feet 2 inches tall and weighs about 45 kg. She has beautiful dark brown pair of eyes with black hair.