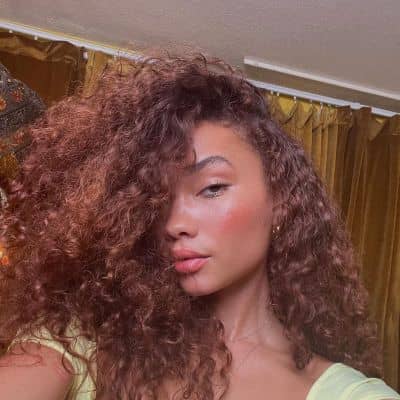 Talking about her love life, Ashley Moore is presently single and she is not dating anyone at the moment. She might be focused on her career right now.

Previously, she has been associated with several celebrities. The star model was dating American rapper Lil Twist. However, their relationship details are not revealed to the public.

Ashley became the media’s headline after she was spotted with popular singer, Justin Bieber. However, Moore confirmed that they were just good friends.

Who is Ashley Moore?

Ashley Moore is a well-recognized American model and actress. Moore achieved great fame after the rumors that she was dating renowned singer, Justin Bieber.

Moreover, she is represented by Nous Model Management who has done work with Kohls, and was featured in GQ magazine.

Ashley Moore was born on 15 July 1993. At present, her age is 27 years old. Likewise, her birthplace is Oceanside, California, USA.

Not much known about her father and mother’s details, Ashley has been secretive towards her parents’ information. Her dad was in the military so she spent her childhood in different places. Moreover, she has a sister as well whose details are still not available to the public.

Talking about her nationality, Moore holds an American identity whereas her ethnicity is African/Caucasian-American.

Regarding education, the star took her early education in different military schools. Later, she attended college for Liberal studies.

From a young age, Ashley Moore was inspired to become a model since she was a young girl. Following her passion, Moore started her career in modeling. However, the star had a tough start. She fights a lot to get into the industry. Ashley visited many modeling agencies but she was rejected by every agency.

However, Nous Model Management offered and sponsored her and the star joined the renowned modeling agency without any doubts. Soon the star started working regularly in the modeling world and improve her career.

From 2015, Moore continued her career after becoming a partner with clothing brand Kohl’s and later she featured in the magazine GQ. Her career achieved great success after she was chosen as one of the models in the TV show, Model Squad that premiered on the E! network sharing the screen with such models as Daniela Braga, Hannah Ferguson, Olivia Culpo, Nadine Leopold, then Shanina Shaik, and so on.

The star earned great fame after she was spotted first time with Justin Bieber in the year 2013.

A talented star, Ashley has earned a handsome amount of money from her profession. Her main source of earning is from the acting industry.

It is reported that Ashley Moore has an estimated net worth of $1 million.

Ashley has never been part of any controversial matter or rumors till now. The model has been preoccupied with her professional and private life.

It seems that Moore prefers enjoying her personal life and does not want to merge it with her professional life.

27 years old star personality, Ashley has gorgeous looks and an admirable personality. She stands at a height of 5 feet 9 inches. Also, she has a balanced bodyweight of 56 kg.

Furthermore, Moore has brown eyes whereas her hair is brown. Her body measurement is 23-24-35 inches(chest-waist-hip) respectively.

Regarding her social media presence, Ashley Moore is an active personality on social media. Ashley has more than 867k followers on her official Instagram account @ashley_moore_.