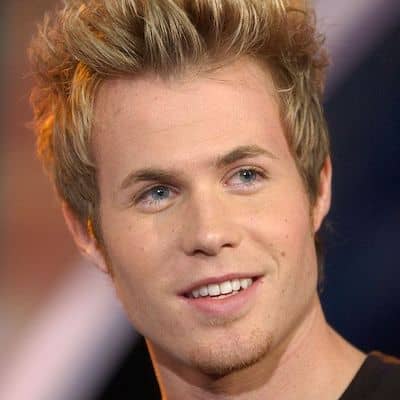 On son Lyric Angel "I get it. This is what everyone's talking about. It was such a rush holding him in my arms."

What was that? Oh my god! I'm getting out of this tub! Did you see the eruption of air that just came from Trevor's direction? Well, now that Trevor's broken the ice, we're going to leave...

I understand about personal sacrifice. My dad told me if he ever saw me on TV he'd turn the channel. My dad does not support what I am doing. But because I feel like this is the right decision for me, I made the choice to do it.

What is the relationship status of Ashley Parker Angel?

Ashley Parker Angel’s relationship status at present is possibly single. He has not shared the details of his affair or girlfriend.

But previously, he was engaged to a model named Tiffany Lynn Rowe. They shared the rings in 2004 and called it off after four years.

During this time, his fiancee gave birth to their first child. Their son Lyric Lennon Parker-Angel was born on 11 Aug 2005.

Who is Ashley Parker Angel?

Ashley Parker Angel is a popular American singer and songwriter who is also an actor. He is popular for being a former member of the boyband O-Town.

His upcoming movie L.A. Stories as Steven is announced and its filming will soon start.

His birthdate is 01 Aug 1981 and he was born in Redding, California, the US as Ashley Ward Parker. The name of his mother is Paula Parker and his father is Darren Parker.

Ashley’s ancestry is a mix of Irish-German and regarding his academics, he has not revealed the details.

Ashley Parker Angel participated in a shoe named series Making the Band where he was selected to be in the band O-Town.

He joined the group in 2000 but left after three years in 2003. A year later Blackground/Universal signed him for the show There and Back.

Moreover, Ashley has appeared in several TV plus video games. Some of his screen projects are,

By the reports of 2022, he has accumulated a net worth of around $1 million US. The per year salary from his work journey is not calculated.

This musician is keeping himself away from rumors and desperate scandals.

Ashley Parker Angel’s height is 6 ft 2 inches and his body weight is average. Moreover, his eyes are blue and his hair is in light brown color.

Ashley is available on many social sites. He is on Instagram and Facebook with over 241k and 205k followers respectively.