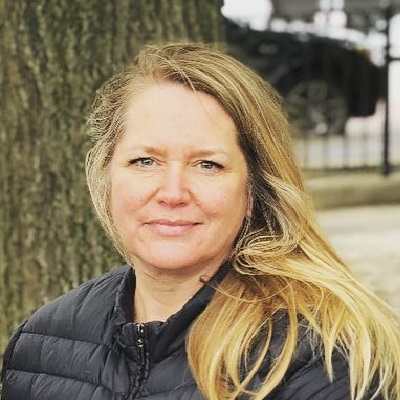 Before that, she was married to Paul Montana. Her ex-husband, Paul is a NewYork based nightclub owner. In 1993, she got separated from him via divorce.

Who is Ashley Richardson?

American Ashley Richardson is a former supermodel. She is renowned for posing for her appearance in world-class magazines like Elle and Cosmopolitan.

Currently, she runs a ballet academy, Gateway Ballet in Boston.

Ashley Richardson was born on 27th June 1965 in Sudbury, Massachusetts, United States. Her birth name is Ashley C. Richardson. She is of British-Swedish ethnicity.

To the date, she has not shared any details on her family background including her father, mother, and siblings. However, she shares a very strong bond with her parents.

She shared a picture of her father and mother via her Instagram post as a token of her love. Details on her academics are also behind the curtain.

In the late ’80s, Ashley Richardson started her career as a model. By the early ’90s, she became a renowned model in the American media. In 1989, she featured get in the American Sports magazine, Sports Illustrated Swimsuit Issue.

Following that, she got featured in the magazine consecutively till 1995 as a model. Besides that, she started making her appearance on the cover of the magazine, Elle for seven times. Also, she covered the Cosmopolitan for two times.

Besides that, she also promoted various brands through the commercial. That includes the pantyhose brand, L’eggs. Also, she appeared as the model in the music video, Let It All Hang Out for the singer and songwriter, John Mellencamp.

In her career peak, she also visited the US military installation to support the states’ troops. Also, she visited the San Diego Naval Submarine Base in 1991.

Currently, she is running the Gatewall Ballet Academy in Boston. Also, she happens to be the owner of the academy. She shares the dance of her students via her Instagram post.

As of 2020, she has an estimated net worth of $5 million. As of now, she is leading a retired life. She makes through her ballet school, Gateway Ballet.

Ashley Richardson has blue eyes with blonde hair. She stands at a height of 6 feet and 1 inch and has a decent weight.

To the date, she has not been through any sort of controversy and scandals that created a buzz in the media.

However, there were rumors about her relationship. Such rumors suggested that she was married to the NFL San Francisco 49ers quarterback Joe Montana.