Ashley Roberts is an American singer, dancer, actress, model, and television personality. She is a member of The Pussycat Dolls. She is in a relationship. 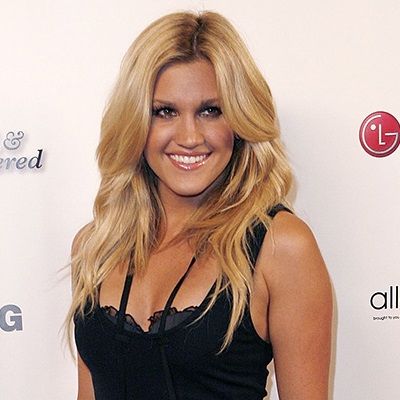 My on-stage character is flirtatious but innocent. She's a fun free spirit. I guess I'm 'the blonde' in the group but [smiles] it ain't natural.

I honestly didn't know about them [The Pussycat Dolls] but the word of mouth among dancers was awesome.

Ashley Roberts is not married but she is dating a dancer named Giovanni Pernice.

Prior, she was with Ryan Fletcher is a Scottish actor. They started to see each other in 2014 but later broke up.

Before that, she dated Kenny Wormald, Mark Wright, and Declan Donnelly. She dated Kenny from 2003 to 2009 and broke up but again got together in 2011.

Who is Ashley Roberts?

Similarly, she is known as the former member of the American pop girl group and dance ensemble, The Pussycat Dolls.

She was born on 14th September 1981 in Phoenix, Arizona, US. She is the daughter of Pat Roberts(father) and Peggy Lorraine(mother). Similarly, she has a brother Jayce Roberts.

Likewise, her father was a drummer for the Mamas & the Papas, later becoming an auto dealer and her mother was a Pilates instructor.

Her father committed suicide in the year 2018. It was difficult for Ashley to cope up with her father’s death, however, her mother helped her deal with it.

Similarly, her nationality is American and her ethnicity is English. Talking about her education, she attended Shadow Mountain High School.

Ashley Roberts is known as a former member of the American pop girl group and dance ensemble, The Pussycat Dolls. Similarly, she left the group in February 2010, in order to pursue a solo singing and acting career. She also left due to the overemphasis on the group’s main singer, Nicole Scherzinger.

Similarly, she is also well known in the United Kingdom due to her participation in reality shows such as I’m a Celebrity…Get Me Out of Here! in the year 2012 and The Jumpin 2015. Likewise, she was a judge for two seasons of Dancing on Ice.

Moreover, she co-hosted Ant & Dec’s Saturday Night Takeaway from the year 2013 to 2016 when former Gogglebox star Scarlett Moffatt took over. Furthermore, she has also taken part in the 2018 series of the BBC’s Strictly Come Dancing, where she reached the final and currently has the highest average score of any contestant.

She was nominated for Grammy Awards in the year 2007 for Best Pop Performance by a Duo or Group with Vocals.

The estimated net worth of her is around $600k. She might earn a huge amount of money from her career but she has not disclosed her salary and incomes.

There were dating rumors of Ashley and Giovanni Pernice. Later it was confirmed that they were dating and Pernice is madly in love with her.

Talking about her body measurements, Ashley Roberts has a height of 5 feet 3 inches and her weight is around 51 kg. Similarly, she has brown hair and dark brown eyes color.

You may also like to read Kelly Osbourne, Paul Simon, and The Bullitts.

The relationship of Italian dancer Giovanni Pernice and Ashley Roberts -its timeline!

Ashley Roberts shares her awful grief of losing her father to suicide on her social media! Know about her family problems!