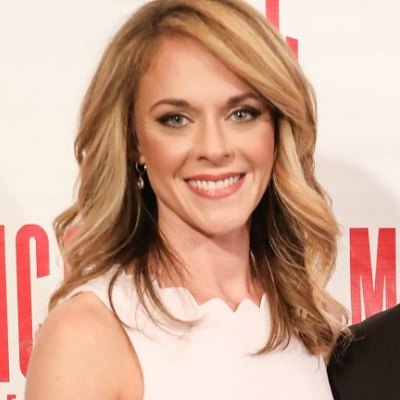 Ashley Spencer is married to Jeremy Jordan. His husband, Jeremy is an actor and singer by profession.

The couple got married on the 8th of September 2012. Together, they are blessed with a daughter, Clara Eloise Jordan (b. on the 21st of April 2019).

Who is Ashley Spencer?

American Ashley Spencer is an actress, singer, and dancer. She is renowned for her plays including Les Misérables, Curtains, and Priscilla Queen Of The Desert.

Last, in 2020, she appeared in the short movie, Avenue Quarantine as Ashley.

Till the date, she has not shared any details on her family background including father and mother. She has a sister, Meg.  Also, details on her academics are behind the curtains.

Besides that, there are very few known regarding her early and childhood. However, she was highly inclined to dancing and singing. Among various dance forms, her favorite dance form happens to be ballet.

– Initially, she started her career as a ballet dancer. She first came in the limelight with the NBC’s reality TV series, Grease: You’re the One That I Want!

– In the series, she earned the fame as the Ballerina Sandy. She made it to the finals and came out as the first runner up.

– After that, in July 2007, she made Broadway debut with the musical play, Hairspray. In the play, she portrayed the character of Amber Von Tussle. She gave her final performance on the 13th of July 2007.

– On the 25th of June 2008, Ashley Spencer made an announcement that she will be portraying the character of Sandy in the play, Grease replacing the actress, Laura Osnes.

– Moving forward, she started making an appearance in the various regional plays. That includes Les Misérables at Pittsburgh Civic Light Opera, Hairspray at The St. Louis Muny, Curtains at Pittsburgh CLO. and The Producers at Paper Mill Playhouse.

– In March 2011, she portrayed the character of Divas in the play, Priscilla, Queen Of The Desert under Broadway Production. The character became one of the best in her acting career.

– Moving forward, in May 2012, she played the character of Sherrie in the play, Rock of Ages.

– Apart from theatre plays, she also featured short movies like 2011-I Wish…, 2014- Russian Broadway Shut Down, and The Last Five Years.

– Besides acting, she is also a singer. She is famous for her music genres; R&B and Soul. As of now, she has not launched any music albums.

As of 2020, she has an estimated net worth of $400 Thousand. As a theater actress, her earnings are in the range of $15k – $81k. Besides that, she also makes through her profession as a singer and dancer.

Talking about net worth, her husband, Jeremy Jordan has an estimated net worth of $3 million. His net worth is attributed to his career as an actor and singer.

Ashley Spencer has blue eyes with blonde hair. She has a decent height and weight. However, details on her body stats are not available.

Till the date, she has not been part of any kind of controversy and scandals that created headlines in the media. Also, she has managed to maintain a distance from any type of rumors too.

You may also read the bio of Michelle Woods, Heidi Hawkins, and Mandla Kadjay Carl.