Ashley Strohmier is an renowned award-winning journalist and former model.

Ashley Strohmeier is not married yet but she is in an open romantic relationship. Currently, she is dating a guy named Michael Counihan who is a personal trainer, fitness model, and law enforcement officer with the NCY Police Department.

Strohmeier’s boyfriend has been featured in numerous bodybuilding magazines too. The couple started dating in late 2017 and on the 21st of January 2018, she uploaded Michael’s picture for the first time on her respective Instagram account.

Since then she has been uploading their together pictures and moments on her social media handles. 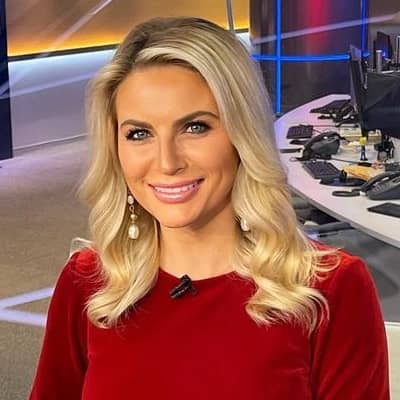 Who is Ashley Strohmier?

Ashley Strohmier is an American renowned award-winning journalist and former model. She is currently working with Fox News as an Overnight Anchor & Correspondent since March 2020.

Previously, she worked for ABC affiliate KMIZ-TV Columbia, Missouri as an anchor and reporter from 2013 until the 26th of February 2020.

Strohmeier was the 2010 Miss Missouri pageant winner and a top 10 finalist at Miss USA.

Ashley was born on the 1st of January 1989, in Jefferson City, Missouri, United States. She is the daughter of Steve Strohmier (father) and Dana Strohmier (mother). Further, she has two younger brothers named Blair Strohmier and Mitch Strohmeier.

Talking about her academics, she attended Helias High School, a private Roman Catholic School based in Jefferson City, Missouri. Afterward, she enrolled at the University of Central Missouri in Warrensburg, Missouri in the year 2007.

At first, she studied Political Science but later on, she switched majors and earns a bachelor’s degree in Criminal Justice.

Strohmeier holds an American nationality and belongs to the Caucasian ethnicity.

From the age of 12, Ashley started her career as a model. She worked for Vabros & Associates from November 2001 to November 2010. Between the year, she has participated in the Miss Missouri USA pageant in the years 2007, 2008, and 2009 where she remained the 1st runner-up, 2nd, and 3rd respectively.

Ultimately, she was crowned as Miss Missouri USA in the year 2010. Similarly, she ranked in the list of top 10 finalists for the Miss USA contest. She was nominated for the most photogenic and best swimsuit awards in the contest. Following this, she took part in a Missouri tour and nearby states while hosting public events and so on.

Prior to joining KMIZ, Strohmier worked as a host for KQFX Columbia and FOX 22 in Missouri. She had also worked as a state manager for Fox Sports. In 2013, she joined KMIZ-TV (ABC) in Columbia, Missouri as a general assignment reporter and anchor. She covered crime as well as politics on local and state levels. She served the station for 7 years and during her tenure, she worked as a news anchor from August 2017 to February 2020.

Additionally, she worked as a solo anchor for News This Morning as well as produced and managed its daily content. As of now, she is serving as an overnight anchor and news correspondent on FOX News Channel (FNC).

Earlier, Ashley encountered Fidel Berisha who is engaged at Miss Universe Organization while she named her ‘Walking Up in Vegas’. As Strohmier was dressed up in a lingerie outfit with sultry makeup in a photoshoot and the things made an intense argument between them.

Ashley has earned an impressive amount of wealth throughout her successful career as a news reporter. Besides, she is a former model and also earns from her sponsors and makes event appearances.

Her current estimated salary is around $150,000 per year on Fox News as per other online resources. However, her net worth and other assets are still under review.

Similarly, she has a blonde hair color with marble gray pair of eyes color.