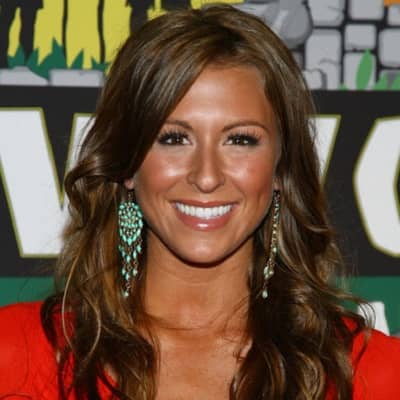 Ashley Underwood is married to Chris Markwood as of now.

Chris a former UMaine men’s basketball player and assistant coach. He is a coaching staff at Northeastern University. The couple exchanged vows in 2014.

On December 27, 2014, Ashley announced that she was pregnant with their first child. And the couple welcomed their daughter, London Grace Markwood on July 2, 2015.

Who is Ashley Underwood?

Ashley Underwood is an American basketball player and a former pageant contestant of Miss USA pageant in 2009. Moreover, she appeared on Survivor: Redemption Island in 2011.

Ashley was born on February 8, 1985. Her birthplace is Benton, Maine, United States.

She grew with her family on their farm. Her mother was a businesswoman and manages two businesses. But her parent’s names are not revealed.

Ashley has four siblings. Her younger brother was adopted. Talking about her nationality she is American, she belongs to English ethnicity.

Ashley has her schooling from Cony High School. Likely, she completed her education at the University of Maine. Underwood graduated in the year 2007 with a degree in nursing.

Ashley Underwood is a formal basketball player. She played basketball from her school and was a finalist for the 2003 Miss Maine Basketball award too. Underwood also received a full-ride basketball scholarship at her university. There she became one of Black Bears’ top players leading the team in scoring (15.2 ppg).

Furthermore, it finished with being a third in the American East Conference in scoring, earning all-conference honors in the process. Ashley closed out her basketball career with 1,195 points. She was ranked in the Top 10 all-time scorers for the Black Bear woman’s basketball program.

Her professional basketball career started when she signed a contract to play in Geneva, Switzerland. She told that she was the only American on the team at that time. Similarly playing in Europe for a season, she returned to her state of Maine.

Ashley graduated with a degree in nursing in 2007. She formerly worked as a school nurse in MSAD 49 system, serving grades K-12.

After that, she also represented Maine in the nationally televised Miss USA 2009 pageant. It was broadcast live from the Planet Hollywood Resort and Casino in Las Vegas on April 19, 2009.

In the year 2011, Underwood appeared on Survivor: Redemption Island, the twenty-second installment of the Survivor TV series. And she led it to the finals.

There, Ashley was the only woman to win more than one individual Immunity Challenge on Redemption Island.

According to some sources, her net worth is around $400K. Other information regarding her earning is not available.

Up to now, she hasn’t been in an incident that could create any type of rumors or controversies about her in the media.

She has brown dyed into blonde colored hair with dark brown eyes.

You may also read the bio of Missy Yager, Jalen Green, Patrick Ewing, and Jasmine Jordan.