Ashley Williams is an American film, television, and theatre actress. She is married to Neal Dodson and is the mother of two kids.

Ashley Williams has been married to the Independent Spirit Award-winning film producer Neal Dodson since 2011.

The couple began dating for a  long time before their engagement in 2009 and they finally they tied their knot on May 29, 2011, at the Brad Paisley’s Farm.

The duo welcomed their first child, Gus Williams Dodson on October 5, 2014. She was 2 months pregnant in 2016 but suffered a miscarriage during the summer of that year. Later, the couple welcomed their second child, Odie Sal Dodson on May 17, 2017. 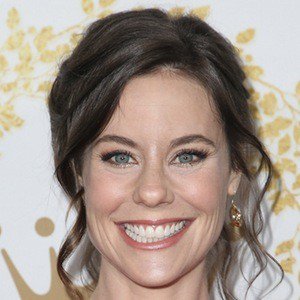 “Something Borrowed' is looking like a romantic comedy, but it's a comedy. It shines as a comedy

it's definitely not just about the romance. It's an honest depiction of the struggle between the characters. The comedy aspect will make it shine.”

Who is Ashley Williams?

Ashley Williams is an American film, television, and theatre actress and she is famous for starring in the television series ‘The Jim Gaffigan Show’ and in the NBC series ‘Good Morning Miami’.

She has performed in more than a dozen different television pilots and done over 150 episodes of television series.

She was born on November 12, 1978, in Westchester Country, New York, USA. Her birth name is Ashley Churchill Williams and she is currently 43 years old. Her mother’s name is Linda Barbara(fundraiser for The Michael J. Fox Foundation) and her father’s name is Gurney Williams III(freelance health and science writer).

She has got a younger sister, Kimberly Williams-Paisley(actress). She is also the sister-in-law of Brad Paisley(Country Music Star). Ashley holds American citizenship but her ethnicity is unknown.

She joined Rye High School in Rye, New York. She completed her Bachelor of Fine Arts from the Boston University College of Fine Arts in May 2001.

She made her big screen acting debut from the movie ‘Indian Summer’ in 1993 in which she portrayed a non-speaking role of Ida Heineken. Then she played the teenage Danielle Andropoulos on the soap opera ‘As the World Turns’ from 1994 to 1996.

Other major roles which she performed includes in the TV series ‘Good Morning Miami’ from 2002 to 2004. After that, she appeared in the episodes ‘Psych’, ‘How I Met Your Mother’, ‘Huff’, ‘Law & Order: Special Victims Unit’, ‘The Protector’, ‘Warehouse 13’, etc.

In addition to that, she portrayed the role of Victoria on six episodes of the television series ‘How I Met Your Mother’ and starred in the Patricia Cornwell’s movies ‘The Front’ and ‘At Risk’ in 2010. Ashley reprised her role as Victoria on ‘How I Met Yoru Mother’.  She made her Broadway debut playing law student Ellen Roarke in John Grisham’s ‘A Time To Kill’ on September 28, 2013, with the opening night on October 20, 2013.

Her recent roles include as Nora Cecchino in the episode ‘Wild Game’ of the series ‘instinct’ in 2018. Later, she portrayed the role of Allie Shaw in the television film ‘Christmas in Evergreen: Letters to Santa’ in the same year.

She has an estimated net worth of around $3million as of 2022, and she has earned that sum of money from her work in movies.

She has been successful in maintaining her profile low. She has not been involved in any rumors and in controversies in her professional career.