The blue-eyed boy, Ashton Kutcher and Mila Kunis are the couple goals globally. His wife Mila's first kiss was with Ashton for a show in which they were featured.

Ashton Kutcher is currently married to actress, Mila Kunis. They first met in 2012 and got engaged on February 27, 2014. The couple started dating in 2012. After years of dating, they tied the knot on July 4, 2015. Together, they have two children. They are Isabelle Kutcher and Dimitri Portwood Kutcher.

Before this, he has been into several other relationships and marriages too. He was married to actress, Demi Moore from 2005 to 2013. They started dating in 2003.

Similarly, he has been in other relationships with Sara Leal, Brittany Jones, Ashley Scott, Monet Mazur, Lindsay Lohan, and January Jones in the past. 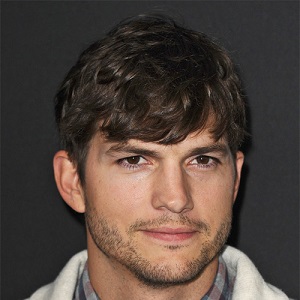 My parents couldn't give me a whole lot of financial support, but they gave me good genes. My dad is a handsome son-of-a-gun, and my mom is beautiful. And I've definitely been the lucky recipient. So, thank you, Mom and Dad

Modeling is the best because you have to look hot, which comes easy to me, you know. I'm blessed with that

The scruffier your beard, the sharper you need to dress.

Who is Ashton Kutcher?

Ashton Kutcher is a producer, actor, and model. Ashton is also an entrepreneur and investor. He was ranked no. 3 in VH1’s 100 Hottest Hotties.

Presently, he is a prominent figure in the media for starring in the psychological thriller film, “The Butterfly Effect”. He played the character of Evan Treborn in the film.

Additionally, he is famous for starring in the series, “Two and a Half Men”, “The 70’s Show”, and others.

Ashton was born Christopher Ashton Kutcher in Cedar Rapids, Iowa, on February 7, 1978. As of 2021, he is 43 years old. He belongs of Czech, German and Irish descent.

Michael is an American businessman, public speaker, and advocate.

When he was 13 years of age, his brother, Michael needed urgent surgery because he was diagnosed with cardiomyopathy, a disease when a heart is four times the size it should be.

Ashton loved his brother so much that he was ready to give his life and willing to give Michael his heart.

Per his education, he attended Washington High School in Florida. Later, he also enrolled at Clear Creek Amana high school, and in 1996, he joined the University of Iowa to study Biochemical Engineering.

Ashton began his modeling career at an early age. In 1998, he participated in the IMTA competition. Although he lost the competition, it boosted his confidence in the modeling field.

He also worked in the General Mills plant as a housekeeper.

Later on, he modeled for several agencies and Calvin Klein, and others. Afterward, he also modeled for several other campaigns, advertisements, and events. In his acting career, he made his debut as Michael Kelso in the series “The ‘70s Show” in 1998.

The next year he made his debut in the film, “Coming Soon”. He was already gaining huge popularity through his portrayal of Michael Kelso. He played the lead role from 1998 to 2006. Afterward, in 2003, he starred in the film, “Just Married”. Similarly a year after, his performance in the psychological thriller, “The Butterfly Effect” made him even more popular.

Additionally, he starred in films like “Jobs”, and “The Guardians”, “Killers”, “No Strings Attached”, and others. Furthermore, his portrayal of Walden Schmidt in the TV series, “Two and a Half Men” earned him even more success. Also, he is a producer. He works as a producer. He has produced several shows and films.

As of 2022, Ashton has a net worth of around $280 million. His income from his television career is estimated to be $25 million. He has an apartment in West Village NYC.

He has been the brand ambassador of Nikon Cameras, Popchips, Calvin Klein, Gap clothing, Pizza Hut, National Mentoring Month, and much more.

Ashton keeps himself away from media tittle-tattle. Previously, some rumors supported his affair with the singer, Rihanna. Presently, there are no rumors as well as no controversy that surround his personal and professional life.

Ashton Kutcher has a height of 6 feet 2.5 inches. His body weighs 80kg. He has Wispy brown hair and dark brown eyes. His shoe size is 11 US.