Asia’s sexual orientation is not straight, she is a lesbian. She is in a relationship with a girl who goes by the username TaySoRandom on her Instagram. 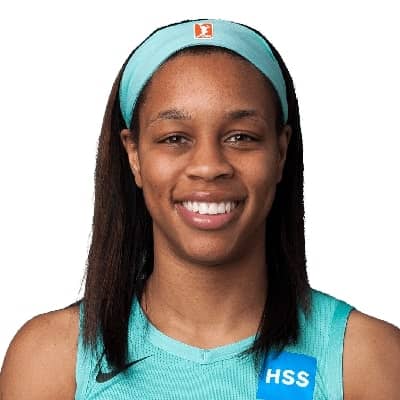 Who is Asia Durr?

Asia Durr is an American professional basketball player. She plays from the New York Liberty but couldn’t play for the 2020 season due to the corona pandemic.

Asia was born on April 5, 1997, in Douglasville, Georgia. She holds an American nationality and has African-American descent.

Her mother’s name is Terry Sr. and likely father’s name is Audrey Durr. Asia has two brothers Christian Durr and T.J. Durr. Similarly,  she has one sister named Genesis Durr.

Asia has her schooling from St. Pius X Catholic High School in Georgia. While in school, she won two state titles in 2013 and 2014. She then attended the University of Louisville.

Asia finished her college career at Louisville with an average of 17.8 points, 2.2 assists, and 3.2 rebounds.

Asia was enrolled by New York Liberty as the 2nd overall pick in the 2019 WNBA draft.

She debuted playing against Indiana Fever on 24 May. She scored 8 points in the first 25 minutes of playing time. The player was in around 18 games in her rookie season. She achieved 9.7 average points in 26.7 minutes per game.

Asia missed the entire 2020 season due to coronavirus.

Asia has also participated in various community service activities such as writing letters to U.S. troops, helping with the Shoes for Haiti campaign, volunteering locally at a food pantry, and so on.

Asia has amassed a net worth of around $1 million from her basketball career.

The player hasn’t faced any rumors or controversial news that created a buzz in the media.

However, she was in the headlines when she tested positive for COVID-19 back in June. 2020 and wasn’t able to play for the 2020 season.

Asia even shared that she feels the effects of COVID-19 nearly eight months after her diagnosis. She is hoping to play from the 2021 WNBA season.

Similarly, she has black-colored hair with beautiful dark brown eyes.

Likely, she joined Twitter in Nov 2011 and has more than 11K followers now.