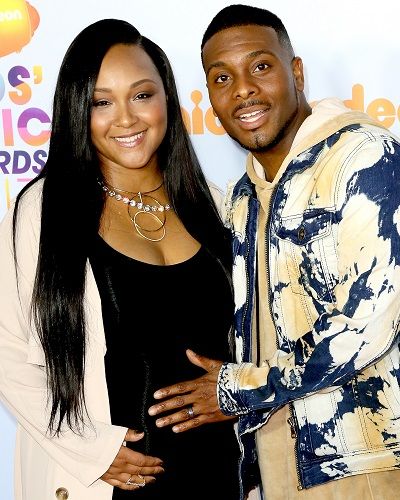 Asia Lee is an actress and costume designer. She is the Executive Producer for Faith Producers TV & Film Production Company. Asia gave the voice of the local population in the 2013 Grand Theft Auto V.

As a custom designer and executive producer she has worked in 2012 She Is Not My Sister. Lee is also the wife of Kel Mitchell.

What is the age of Asia Lee?

Asia Lee was born on 4th November 1978 in Los Angeles, California. Asia is 41 years old at present. Lee started her own sunglasses line, Asia Lee Custom Shades. When it comes to family life Asia is private. She has not revealed anything about her parents and siblings.

Asia Lee and Kel Michelle walked down the aisle on 8th January 2012. They were awarded the Carson Black Chamber in 2016 for their show The Back House Party. They registered at Kohls, Crate & Barrel, Bed Bath & Beyond, Target, WAL*MART & Macys.

“My wedding day on sunday was everything I dreamed of! My wife is so beautiful! God is so good! I thank him for blessing me with her!…I cant stop smiling! Thank you Jesus!”

They attended the Good Burger popup opening in July 2019, Asia posted a photo of her and her family. She wrote,

“When #Family Link up! Having all of our Kiddos @goodburgerpopup was everything! The Mitchell Kids are #AllThat Love Themmmm.”

Asia Lee gave birth to their first child Wisdom in July 2017. After her birth, Mitchell shared the happy news on Instagram and wrote,

“My love @therealasialee gave birth to our baby girl Wisdom on Saturday afternoon. She was 7lbs 11oz with a head full of hair and full of happiness! Im so grateful and happy! My baby girl is here!”

“My Wife is the most amazing woman she was so strong throughout the birth. Im so proud of her! @therealasialee you are My super woman! You amaze me everyday! Thank you for this gift! Our daughter is a reflection of your beautiful greatness and loving spirit!”

At present, Asia is pregnant with her second child.

How much is Asia Lee’s net worth?

Asia Lee has an estimated net worth of $200 thousand. Her husband Kel Mitchell’s net worth is estimated to be around $3 million. Kel has worked in TV series All That, Kenan & Kel, The Steve Harvey Show, Sister, Sister, Sabrina, the Teenage Witch, Figure It Out, Cousin Skeeter, Two Heads Are Better Than None, Clifford the Big Red Dog, City Guys, My Coolest Years, The First Family, The Thundermans, Game Shakers, Henry Danger, and many others.

He has also appeared in films like Good Burger, Mystery Men, The Adventures of Rocky and Bullwinkle, Clifford’s Really Big Movie, Honeydripper, Dance Fu, Battle of Los Angeles, Caught on Tape and others.

His singles are Watch Me Do My Thing, We’re All Dudes, Who Are Those Mystery Men, Pedal to the Steel, and Kel Mitchell.

Also read Insight on Tom Mahoney and Marcia Cross’s married life! Known about his children, cancer, net worth and biography

She lives up to her bio and posts funny TikToks. Other than that, she posts pictures of her daughter and husband. Lee is also on Twitter, she has more than 5k followers. She is active on Twitter since April 2009. Likewise, she makes tweets frequently.

Kel Mitchell is an American screenwriter, musician, dancer, comedian, plus actor. He was featured in a comedy show All That.

Mitchell also appeared in the sitcom Kenan and Kel as Kel Kimble. He is also the voice behind Good Burger in the Disney XD cartoon. Kel was the co-host in Dance 360 and it lasted only a season. Read more bio…