Asian Doll aka Asian Da Brat and Queen Von is a rapper, social media star, as well as a businesswoman.

At present, Misharron Jermeisha Allen aka Asian Doll is single.

Previously, she was in a love relationship with King Von. Professionally, King Von was a renowned rapper.

The couple started dating each other in December 2018. However, King Von had untimely demised on 6 November 2020. He was shot during a gang fight outside an Atlanta nightclub.

Allen twitted to move on after such a sorrowful event.

Back then, the rapper was dating BandHunta Izzy. He is also a well-known rapper.

The duo started dating each other in April 2017. However, they were separated in 2018. 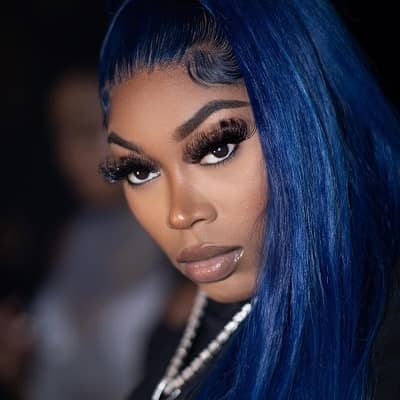 Who is Asian Doll?

Doll is mostly famed for her 2016 mixtape Drippin In Glo and Rise of Barbie Doll Gang.

Asian Doll was born on 7 December 1996. As of now, her age is 24 years old. Likewise, her birthplace is Dallas, Texas, the USA. She was born to her father, Michael Allen, and her mother, LaKeithia Lewis. The rapper’s real name is Misharron Jermeisha Allen.

Also, she has four siblings and is the second child of her family. Doll was raised by her mother after her father was punished in jail. Misharron spends her childhood on the south side of Dallas.

Talking about nationality, she holds American identity whereas her ethnicity is African- American.

Queen has never revealed her educational details till now.

The stunning rapper, Asian Doll started her music journey by releasing Da Rise of Barbie Doll Gang Empire on 16 December 2015. Following her debut, the star launched her another album “Drippin in Glo” in 2016. The album had a huge fan base and gained high popularity.

At the end of the year, Asian Da Brat had released ‘Project Princess Vol. 1’. Lil Mister, a famed rapper noticed her popularity and ability and pursued to collaborate with her in many projects. She then released many albums and songs along with him.

In 2017, Allen launched the album ‘Outtaspace’ and in August she published the second album of the year, ‘Kill Bill, Vol. 1’.

Freshly, She has released Doll SZN Reloaded on 8 April 2020.

The famed rapper has earned handsome money from her multiple profession. Allen has been active from 2015 till now.

It is believed that Asian Doll has an estimated net worth of $1 million.

However, she has never stated her exact earnings, salary, and assets details till now.

The celebrity has been in the media’s eye time and again. Allen is very genial towards her contemporaries. It is reported that she has been involved in using rough language with her friends and other stars.

Misharron was united with Cuban Doll as a friend and colleague. However, she threw some vulgar words at her in the public. Afterward, the star admitted it was intentional. Doll mentioned that Cuban Doll made a racial comment against her. She was also engaged in a corresponding verbal fight against Bali Baby.

Likewise, Allen is criticized in many events for dressing up like Nicki Minaj. However, the fans claim that she does not look as beautiful as Nicki in those peculiar outfits and wigs.

Asian Da Brat has a bad image in the public for her strange hairstyles and makeup as well.

The beautiful singer, Asian Da Brat has dazzling looks and a graceful attitude. Misharron stands at a height of 5 feet 6 inches. Also, she has an average body weight of 59 kg.

About her social media presence, Asian Doll is active on social media. She has more than 3.6 million followers on her official Instagram account @asiandabrat.

It seems that the rapper has massive supports, fans, and followers on social media.