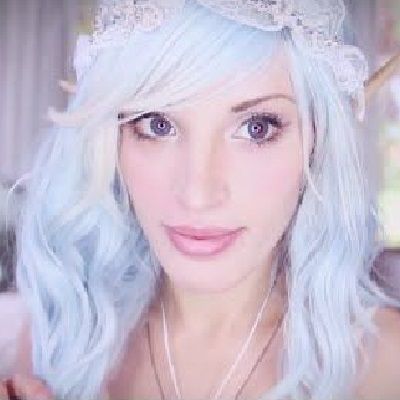 Cherry Crush has kept her private life and hasn’t disclosed on her love life and relationships. It is not known whether she is dating anyone or not.

Who is ASMR Cherry Crush?

She lives with the motto, “No person has the right to rain on your dreams”.

Cherry Crush was born on 10th July 1990 in Florida, United States and raised in Miami. Her real name is not disclosed yet to the public and the only h be her professional name, ASMR Cherry Crush.

Her father is originally from England and her mother is from America.  There is no information available regarding her parents and siblings.

She used to reside with her English aunt and had always loved making videos from her early age.

Regarding her education, Crush was homeschooled until 12th grade. She only attended a regular school when she was in 9th grade for just one week.

After she completed her education, Crush decided to work in the beauty industry. She went to some peagent but however, it couldn’t lead her to success and she left it.

After it, she created her own channel and started to post various vlog content on her website. Furthermore, she did the various question and answer videos, makeup and beauty tutorials as well as other content depending on her mood.

She has her two channels ASMR Cherry Crush and Cherry Crush which were created on the same day in March of 2012. Her channel is all about ASMR (Autonomous Sensory Meridian Response) and features activities that tend to relax the viewer. It has meditation, relaxation, and sleep videos. Both of the channels has collected a lot of subscribers.

Crush also has some cool music and covers on her channel Crush project and also does collaborations on songs for it.

Similarly, from her, another Youtube channel named Cherry Crush she earns $60-$963 per month and her estimated earning per annum is $722-$11.6K.

Crush has a height of 5 feet and 2 inches. She normally dyes her hair in a different color.