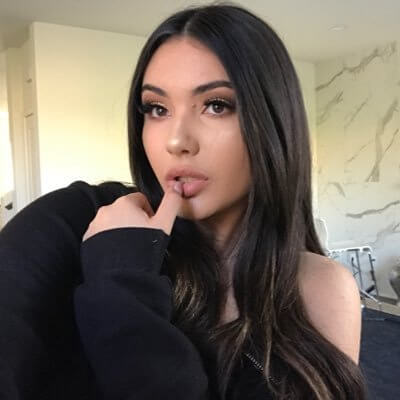 Atiana De La Hoya is single. She has not revealed anyone she has dated in her life. She did post a picture with one of her “boy friends” on Instagram with the caption, ‘obsessed with him’ on February 18, 2019. However, it has not been confirmed that she really is dating him.

Who is Atiana De La Hoya?

Atiana De La Hoya is an American reality TV star and a social media personality. She is well-known for her appearance in ‘Meet the Barkers.’ Moreover, she is also well-known as the daughter of Oscar De La Hoya and Shanna Moakler.

Atiana De La Hoya was born as Atiana Cecilia De La Hoya on 29th March 1999 in Los Angeles, California. As of 2020, her age is 19. She was born to parents Oscar De La Hoya and Shanna Moakler. Her father is a former professional boxer whereas her mother is an actress.

Her parents never got married to each other. However, her mother got married to Travis Barker in 2004 and got divorced in 2008. Her step-siblings from her mother’s side are Alabama Luella Barker and Landon Asher Barker. She also has step-siblings from father’s side, Oscar De La Hoya Corretjer & Nina De La Hoya Corretjer. Her ethnicity is Mexican-American.

She has not revealed her educational background.

Atiana first came to the spotlight after her mother married Travis Barker. She then appeared in MTV’s reality show, ‘Meet the Barkers‘. After that, recently, she made an appearance in the reality TV show, ‘Growing Up Supermodel’.

Other than those two shows, she has not appeared anywhere else. She is just 19 so she has a long way to go and maybe follow the footsteps of her mother and become a successful model or an actress.

She stands at a height of around 5 feet 8 inches. Moreover, she weighs around 63 kg. She has attractive body measurements of 34-24-36 inches for breast, waist, and hips. She has brown hair and brown eyes.

You may also like to read Bio, Career, Net Worth, Family, Relationships, and more of  Cindy Kimberly, Oscar De La Hoya, Shanna Moakler.