Atika Shubert is an award-winning CNN journalist and reporter. She has covered the news including Israeli-Palestinian conflict, the fall of Indonesia’s President Suharto and many more. 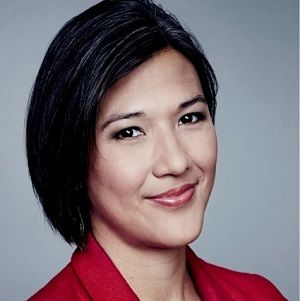 Atika Shubert is currently a married woman. She is also a caring and loving mother as well. However, she has remained very secretive about her marriage and wedding.

Therefore, there is no information about her life partner and her children. Regardless, she seems to be married for a very long time and is enjoying a sound and happy relationship with her loved ones.

Who is Atika Shubert?

Atika Shubert journalist, reporter, and broadcaster who hails from America. She gained a lot of popularity and fame appearing as a Senior International Correspondent on CNN based in Berlin, Germany.

Moreover, she has also worked as a top-rated correspondent in London, Jerusalem, Tokyo as well as Jakarta for CNN.

Atika was born on August 2, 1970, in Jakarta, Indonesia to Asian ethnicity.

She holds an American Nationality. Her father is a businessman and her mother was also a journalist.

In 1991, she finished her schooling from Jakarta International School. Later, she graduated with a bachelor’s degree in Economics from Tufts University located in Boston.

Atika Shubert started her career as a producer for CNN based in Jakarta, Indonesia. There she covered important news such as the fall of Indonesia’s President Suharto in the year of 1998, East Timor’s transition to independence in the year 1999. She has been serving as a senior international correspondent for a very long time.

Also, she has contributed to CNN from Tokyo, London, Europe, Germany and so on. She has reported significant news stories in Japan such as the controversial deployment of Japan’s Self Defense Forces, the 60yh anniversary of the 1945 atomic bombing of Hiroshima as well as a Japanese hostage situation in Iraq, 2002 Bali bombings, and so on.

Moreover, she reported on Tsunami reporting from Indonesia in the year of 2004. She was based in the CNN London bureau covering UK and Europe from 2008 to 2015. After that, she was relocated to CNN based in Germany.

As a result of a long-spanning successful career for such a long time, it has presented her fame as well as fortune. As of now, her net worth is estimated to be $15 million but her salary is not known.

Atika has always maintained an admirable image in her career with a respectful reputation. She is always cautious and professional over her actions in her entire career.

Atika Shubert has a well-maintained body structure despite her growing age. However, her exact height, weight, body statistics are not known.