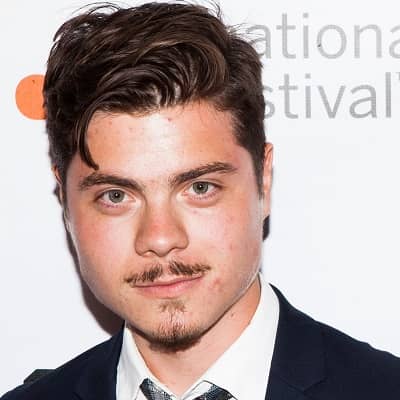 Previously, he was in a romantic relationship with his friend Sarah. They were together from 2015 to 2018. The two first met at a party.  Atticus also used to upload several pictures of them together onto his Instagram account. However, they get separated in the summer of 2018.

The actor was rumored to be dating his best friend Ana. They even used to attend various events together.

Who is Atticus Mitchell?

Atticus Mitchell is a Canadian actor and famous for portraying movies like My Babysitter’s a Vampire, Radio Rebel, and others.

Similarly, he is also a musician and drummer of a band called “The Fishwives”.

Mitchell was born on May 16, 1993, in Toronto, Ontario, Canada. His both nationality and ethnicity are Canadian.

Talking about his family, her father is a football coach at a local high school. Likely, her mother works as a secretary at a local telecommunications company. However, his parent’s name is unknown.

He grew up with his three siblings Clarissa, Caleb, and Fox.

He used to perform in various plays from her school and then started in the local theatre. He graduated in the year 2011 and didn’t continue his studies.

It was in the year 2009, Atticus started his acting career. He plays the recurring role of Carlos Martinelli in the YTV series How to be Indie.

And then he played Benny Weir in the television film and series My Babysitter’s a Vampire. He has also got nominated for a 2011 Gemini award for his performance in the movie.

The next year, the actor portrayed Gabe in the Disney Channel television film Radio Rebel. Furthermore, in 2013, he guest-starred in Hard Rock Medical. He has also portrayed Graydon in a post-apocalyptic film, The Colony, and also in Bunks the same year.

In 2013, Atticus appeared as Mickey Hess in the four episodes of Fargo. And then she played the lead role of Andrew Shinky in 2015 Young Drunk Punk. In 2016, she starred as Garth in Second Jen. Talking about other shows she has worked for, they are Killjoys (2017), The Expanse (2018).

His latest work was working in New Eden, The Hardy Boys in 2020. Talking about his music career, he is a drummer of a band called “The Fishwives”.

There were rumors spread that Atticus was in a relationship with his girlfriend, Ana. Ana is his best friend. The two often post various photos together and also attend various events together.

However, the exact information is not known as these rumors have never been confirmed.

Atticus stands with a height of 6 feet and weighs around 77 kg. With a fair complexion, he has dark brown hair and green eyes.

Similarly, he has her own YouTube channel with 2.95K subscribers.

You may also read the bio of Bryan Greenberg, Mitch Rouse, Dov Tiefenbach, and Ben Savage.