Aubrey Plaza is an actress featured in the hit NBC comedy series Parks and Recreation. Aubrey is married to Jeff Baena. 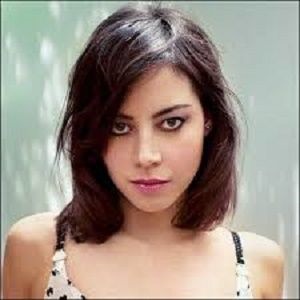 So proud of my darling husband @jeffbaena for dreaming up another film that takes us to italia to cause some more trouble.

When you improvise, you work off the laughs from the audience, but when you step on stage to do standup, it's silent.

I love great acting, as nerdy as that sounds.

Sarcasm is weird. Even not in acting, in life I feel like 'sarcastic' is a word that people use to describe me sometimes so when I meet someone, it's almost like they feel like they have to also be sarcastic, but it can sometimes just come off as mean if it's not used in the right way.

I'm not super comfortable in my skin. I have to make it work for me, and that usually amounts to making it uncomfortable for everyone else. A lot of independent films offer a harsh reality check.

Aubrey Plaza is married to Jeff Baena in May 2021. Her husband is a director and writer.

However, she has not revealed their marriage and wedding details yet! She shared the news after posting a photo with him and in the caption, she mentioned Jeff as her “husband” on IG.

At first, she dated an actor named Michael Cera for about 18 months. The couple met on the set of Scott Pilgrim vs. The World. Aubrey said that they almost got married in 2010 in Vegas, but could not last longer than a year and a half.

After her separation from Michael Cera, in 2011, she started dating named Jeff Baena.

Who is Aubrey Plaza?

Aubrey Plaza is a Comedian and American actress. She is popular for her role as April Ludgate on the NBC sitcom Parks and Recreation.

Plaza had her first leading role as Darius Britt in the 2012 film Safety Not Guaranteed, after appearing in supporting roles in several feature films.

Plaza was born on June 26, 1984, as Aubrey Christina Plaza in Wilmington, Delaware, the USA to Bernadette and David Plaza.

Her mother is an attorney, and her father, a financial advisor. Plaza has two younger sisters, Renee and Natalie.

She was interested in becoming a comedian from her early age.

In 2002, she graduated from Ursuline Academy, an all-girls Catholic school, and New York University’s Tisch School of the Arts in 2006.

She was student council president and participated in productions with the Wilmington Drama League in high school.

In 2004, during her second year of college, Plaza suffered a stroke that caused temporary paralysis and expressive aphasia. Since then she has fully recovered.

She started her career by performing improv and sketch comedy at the Upright Citizens Brigade Theater. She has performed stand-up also and has appeared at the Laugh Factory and The Improv.

In 2009, she played Seth Rogen’s love interest, Daisy,  Funny People directed by Judd Apatow. In the same year, she appeared in Scott Pilgrim vs. the World, and Derrick Comedy’s Mystery Team, which debuted at Sundance.

From 2009 to 2015, she played April Ludgate in Parks and Recreation. Moreover, Plaza performed at “A Night of 140 Tweets: A Celebrity Tweetathon for Haiti”, at the Upright Citizens Brigade Theatre in Los Angeles on March 12, 2010. She appeared in Portlandia in 2011.

As well, she has featured in 2012, in Father John Misty’s music video for the song “Hollywood Forever Cemetery Sings” from the album Fear Fun.

Plaza was in Cassorla’s “Bona Fide” in the 2014 video where she also made her saxophone-playing debut. In January 2014, at the Sundance Film Festival Plaza’s film, Life After Beth, which was written and directed by her boyfriend Jeff Baena, premiered.

She portrayed Aaron Burr in 2016, in the “Hamilton” episode of Drunk History. It was announced that in 2017, Plaza would star in the indie comedy An Evening With Beverly Luff Linn. Plaza has been starring as Lenny Busker since 2017, in the FX series Legion.

In 2012, she has received the ALMA Award for Favorite Movie Actress – Comedy/Musical.

Besides that, she has been nominated in 2014 for the American Comedy Award and for EDA Special Mention Award in 2017.

In 2013, she was chucked out from the MTV Movie Awards after she tried to hijack Will Ferrell’s award while he was giving the speech. Will was awarded the Comedic Genius award. Her behavior was quite inappropriate in the public.

She earns a decent amount of money but has been hiding from the media and public.

Her estimated net worth is about $6 million which he earns from her profession.

She is a beautiful woman with brown hair, a white face, and brown eyes.

She does not use Tiktok but the hashtag of her name, #aubreyplaza has over 192 million views on Tiktok.

Off-screen married man, Jim O’Heir is single yet or already married? Hiding it from media or has some another story