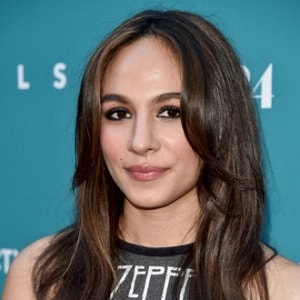 Aurora Perrineau might be living her single life. She is a private person and she has not shared information regarding her affair and relationship. She might be focusing on her career.

Who is Aurora Perrineau?

Aurora Perrineau is an American actress and she is famous as she starred in the 2015 live-action movie of the 1980s animated television series ‘Jem’ where she played the role of Shana.

She was born on September 23, 1994, in the USA. Her birth name is Aurora Robinson Perrineau and she is currently 24 years old. Her father’s name is Harold Perrineau(actor) and her mother’s name is Brittany Perrineau(model). She holds American citizenship but her ethnicity is unknown.

She was signed to Click Model Management, Inc. as a model. She starred in the direct-to-direct film ‘Air Collision’ in 2012. Aurora made her appearance in episodes of ‘Newsreaders’ and in ‘Cahsing Life’ as Margo in 2014. nShe played the role of Shana, who had a dark complexion, and afro-textured hair on the hit 1980’s cartoon ‘Jem and the Holograms’, which was released on October 23, 2015. It became flop as it made only $1.4 million in the box office in its opening weekend.

She was cast in the film ‘Equals’ in July 2014, and the film had its world premiere at the Toronto International Film Festival on September 5, 2015. She portrayed a small role in the film ‘Passengers’ which was released on December 21, 2016. She cast in the Blumhoiuse supernatural thriller film ‘Truth or Dare’ in 2018.

It is estimated that she has an estimated net worth of around $3 million and her main source of income is from her professional career.

She reported in the  Los Angeles County Sheriff’s Department in November 2017, accusing scriptwriter Murray Miller of sexual assault in 2012 when the actress was seventeen. Lena Dunham, the actress of ‘Girls’, initially defended Miller, who was a writer for the series, but later retracted her statements.

The office declined to file charges against Miller on August 10, 2018.

She has a height of 5 ft. 6 inches and she weighs 50 kg. She has brown eyes and dark brown hair.