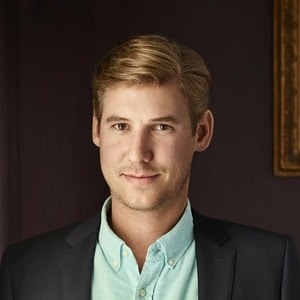 “You looked at me and you go, 'You don't have enough money for her, bro' -- words outta your mouth!"

What is the relationship of Austen Kroll?

There was a love triangle between Austin, his friend Shep and his ex-girlfriend Chelsea where he won the heart of Chelsea. Unfortunately, their relationship didn’t last long. They share a good friendship even after their separation.

Who is Austin Kroll?

Austin Kroll, whose nickname is Austin, is an American actor. He is recognized for his role in ‘Southern Charm Season 4’. His appearance in the fourth season swept away all the limelight and the audience’s curiosity about his lifestyle.

Austin was born on 16 June 1987 in Washington, DC. His father’s name is Tom Kroll and his mother’s name is Wendy Kroll. He was grown up in Charlotte, North Carolina.

His sister’s name is Katie Kroll. Austin went through a lot in his early childhood as he lost his older sister Kyle in a hiking accident.

The family used to go Kiawah Island, South Carolina when Austin was a child. The family bonded after the tragic death of Kyle and Austin is now very close to his younger sister, Katie.

In which university did Austen Kroll attend?

Austin spent one semester studying at the Anglo-American University in Prague, in 2009. He was connected with the Kappa Sigma fraternity. He graduated from the University of Alabama in 2010 with a BS in Business Administration and Management.

He began his career in the craft beer industry with a job as a bar manager at Roast Public House in Madison, Wisconsin in October 2012.

Austen always enjoyed hiking and playing golf with their parents and found his interest in reality series when he became a member of Bravo TV’s reality series ‘Southern Charm’ in the fourth season. The show was aired for the first time on 3rd March 2014 and focuses on the personal and professional lives of societies in Charleston, South Carolina. He earned millions of fans from that reality show.

Austin Kroll: Net Worth and Salary

It is expected that he has a net asset of around $400,000 US dollars and his salary is still under review.

There was a rumor about his love affairs with his co-star, Chelsea Meissner. Though this couple has a good bonding during their show, they do not accept rumors about their love affair.

His relationship with Chelsea hints toward his straight-sexual orientation and rumors about him being gay is probably a hoax.

What are the body stats of Austen Kroll?

Austin has a perfect body structure with decent height. His exact height is 5 ft. 9 inches and he weighs 72 kg. His chest-waist-hips are 38-32-35 inches respectively. He wears shoes of size 8(US). He has brown eyes and blond hair color.