Was Austin dating his wife from college?

Austin Corbett tied the knot with former Nevada volleyball student-athlete Madison Morell in the summer of 2017.

The duo seem to appear from the same college and was active in college teams.

Thus, we are clear that they were dating from their college days and married right after their graduation.

The couple together welcomed a son, Ford in September 2020 and living happily in Nevada, USA. 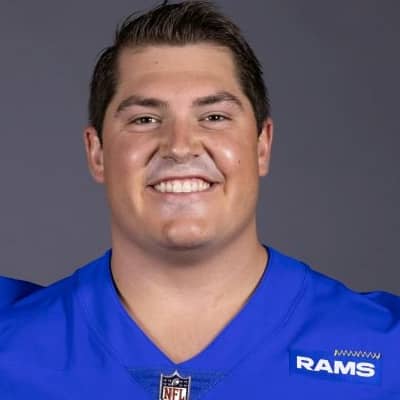 Who is Austin Corbett?

He is getting spotlighted for playing Super Bowl Champion LVI in February 2022.

Corbett was also invited to the 2018 Senior Bowl championship.

Austin Corbett was born on born September 5, 1995, to American parents, father Theron and mother Melissa Corbett. He also has a brother namely, Garrett who played football at San Diego State.

He belongs to the Caucasian ethnicity and holds American citizenship. Also, he resembles the Walker River Paiute Tribe.

Talking about his educational background, he joined Edward C. Reed high school located in Sparks, Nevada. After that, he was enrolled in Nevada College for his further education and graduated in May 2017.

During his high school days, he played on two regional football championship teams in 2012 and 2013. He also participated in wrestling, basketball, and track and field.

Considering his childhood ambition, he wanted to become an orthopedic surgeon. But he was destined to be a footballer. From an early age, he participated in many Football championships.

He became a Member of the National Honor Society and freshman mentor council at Reed.

To begin with his career, he represented his high school as well as college in many football championships.

He was in Nevada Wolf Pack and was in the Offensive Line position as a guard.

Since 2013, as a freshman in this sport, he managed to include himself in the college team and represented seniors, and starred in 12 games in 2017.

He was a semifinalist for the Burlsworth Trophy thus, Phil Steele Magazine named him to All-Mountain West’s first team.

Additionally, he received many honors afterward and was signed by The Cleveland Browns in 2018.

Currently, he is a jersey no 63 and plays as a guard for the Los Angels Rams.

The Browns traded Corbett to the Los Angeles Rams on October 15, 2019, in exchange for the Rams’ fifth-round pick in the 2021 NFL Draft.

The Super bowl LVI commenced on February 13 at 6:30 pm ET at  SoFi Stadium in Inglewood, California, the home venue of the Rams.

Reflecting light on his riches, Austin Corbett has a net worth of around $10 million (2022).

Later, he was traded by The Browns to Los Angels Rams and now he is receiving a $1.892 million average annual salary.

Austin Corbett stands tall with a height of 6 feet and 4 inches and weighs around 139 kgs.

He has 33.125 inches arm length and a 10.5-inch handspan. Further, he has a massively built fit body with a fair complexion.

On top of that, he has brown eyes and brown hair.

He is active on Twitter with 7106 followers and is also available on Instagram under the username @bigcorbs73 has 15.4k followers.