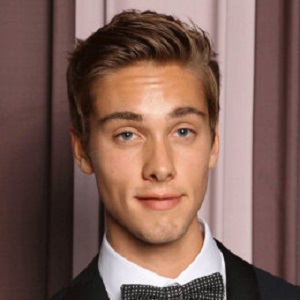 Austin North has been dating Sadie Robertson since 2018. She is the daughter of ‘Duck Dynasty’ star Willie Robertson. Previously, he was in a relationship with his co-star Piper Curda but they parted away.

Currently, he lives in Los Angeles with his parents, sister, and their two dogs.

Who is Austin North?

Austin North is an American actor and musician who is best known for his role as Logan Watson in the sitcom ‘I Didn’t Do It’. He is also popular for his performance in ‘Hessie’ in 2011 and in ‘All Night’ in 2018. Also, he presented the MovieGuide Awards in 2015.

Austin was born on July 30, 1996, in Cincinnati, Ohio, USA. He is currently 22 years old. His mother’s name is Karen but information about his father is not available. He was fond of acting since his childhood. His family shifted to Atlanta, Georgia. He has got a sister named Lauren.

Austin holds American citizenship and his ethnicity is unknown.

He graduated from Oak Park High School in June 2015. Other information regarding Austin’s education is not available.

He was discovered by a talent showcase at the age of 12. He debuted his screen in an episode o Disney XD’s comedy series ‘Kickin It’ in 2011. Then, he portrayed the role of Bodhi in ABC’s soap opera ‘General Hospital’. He made his guest appearance in the Disney Channel’s teen sitcom ‘A.N.T. Farm’ in 2012 and appeared as Holland in the season two episode ‘MutANT Farm II’. He appeared as Dean at Nite’s sitcom ‘See Dad Run’ in 2013.

Then, Austin portrayed the character Logan Watson in ‘I Didn’t Do It’ alongside Olivia Holt, Piper Curda, Sarah Gilman and Peyton Clark in 2014 and played the role of Oz in the Hulu’s teen comedy web series ‘All Night’.

He is also active in the music field as he is one of the talented drummer and often posts cover that he performs alongside his sister and friend, Grant Woell, on his Youtube Channel.

The actor has not been awarded and nominated in his career till date. As he is active in his career, he might win in the future.

He has an estimated net worth of around $1 million and he earns an average salary of around $35k per episode from his career.

There is a rumor that he dated Selena Gomez, however, neither of them has confirmed.

He has got blue eyes and blonde hair. He has an athletic type of body with a height of 5 ft. 8 inches and he weighs 62 kg.