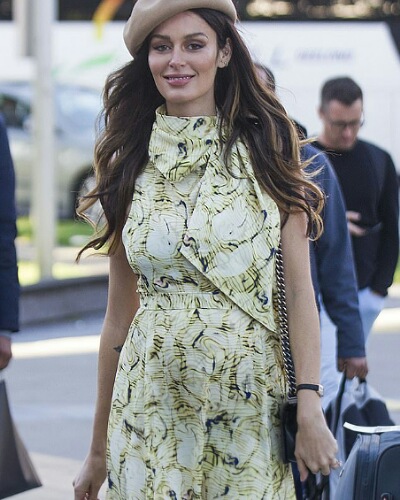 The supermodel from Australia, Nicole Trunfio is due to deliver in less than a week’s time. Her third pregnancy has been a difficult one for her. But despite that, Nicole is thinking of having more babies.

Her difficult third pregnancy does not deter her. Yes, Nicole Trunfio, 33 wants more babies despite that. Her maternity clothes line Bumpsuit released this month. Nicole said:

‘With Bumpsuit around, yes, I would have more babies!’

She added that she felt sexier and more confident with the skintight maternity outfit of Bumpsuit.

Nicole had suffered from hyperthyroidism during this pregnancy which is her third with husband Gary Clark Jr. Her thyroid gland was secreting more of the thyroid hormone than what is required. Therefore, her last few weeks of the pregnant state have been exhausting and tiring.

Due to the thyroid dysfunction, her body metabolism had tremendously risen. There was also a possibility of accompanying weight loss and irregular heart beat. Nicole said:

‘The last few weeks have been so crazy, but exciting – what with all the events, and launching a new business.’

‘I need to put my feet up, but with two babies and two businesses…. that won’t happen.’

But her two children, son Zion, 4 and daughter Gia, 1 are eagerly waiting for the new arrival. They are excited about it. Nicole stated:

‘They are so excited. It could be any day now!’

‘We have been throwing names around, but nothing has really stuck yet – I guess we will know once we meet.’

During this pregnancy, Nicole had health issues. Additionally, she also kept herself busy and immersed in work to launch her new maternity range Bumpsuit. She promises that it would be most comfortable for pregnant ladies and make them feel confident.

‘Bumpsuit was born out of pure need. I never felt comfortable during my first two pregnancies, and I wanted to wear something that didn’t restrict my mid section at any point.

‘I always felt like that gave me really bad acid reflux, and make me just feel uncomfortable all round. And I also never found maternity options that suited my style and didn’t make me feel like a “Mum”.

‘I wanted to maintain my identity but still have that comfort throughout each trimester. I have honestly never felt so stylish, and sexy and confident during a pregnancy.’

‘Bottom line – I wanted something that was comfortable most importantly, that was stylish, and that was easy to put together.’

Revealing the response her new line has she said that women who purchased it messaged her to say that the outfits are valid reason for them to want to get pregnant again.

The price range starts from $ 105 and one can pre-order it.

Nicole Trunfio is an Australian model. Nicole is also a fashion designer and CEO of ERTHjewelry.

She won the Australian version of the TV show Search for a Supermodel, but came second in the International version of this TV show. More info…