Ava Cantrell is an American actress and dancer. She is popular for her role as Penelope Pritchard in the Nickelodeon series ‘The Haunted Hathaways’. She is possibly single. 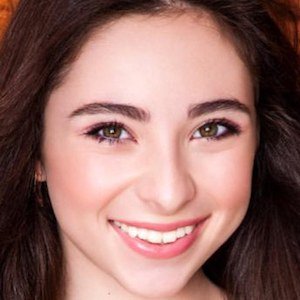 Ava Cantrell is currently single. She is busy in her career and she is focusing on it. Also, she has not been linked with any other celebrity. She likes to keep her profile low and she has not talked much about her relationship.

Who is Ava Cantrell?

Ava Cantrell is an American actress and dancer. She is popular for her role as Penelope Pritchard in the Nickelodeon series ‘The Haunted Hathaways’.

She was born on June 19, 2001, in San Diego, California. Her birth name is Ava Isabella Cantrell and she is currently 17 years old. She has not disclosed any information regarding her parents and siblings. However, it is heard that her father has a Shark Tank product “Radiate Campfire” and he is a successful entrepreneur. Cantrell helps with the family business.

She began dancing at the age of two and a half years. She won many dance competitions and won many titles in contemporary, tap, and jazz. After she began her acting career, she quit competitive dance.

She loves photography and she often posts photos in her social media. Ava holds American citizenship but her ethnicity is unknown.

She has passed the California High School Qualification Exam and she continues virtual school because she is graduating early and with honors with 4.4 GPA.

She began her career in 2008 and made her appearance in many TV commercials, music videoes and short films. She made her breakthrough from the role of Penelope Pritchard on Nickelodeon series ‘Haunted Hathaways’ which helped her gain a Young Artist Awards in 2014 for her recurring role.

Likewise, Ava Cantrell portrayed the leading role of Brooklyn in the 2015 web-series ‘Cam Girls’ which also won many awards. She was cast as Teen Diana in ‘Lights Out’ in 2015 which was produced by James Wan and directed by David F. Sandberg.

Apart from her acting career she is involved in many charities and talks about her starring role in the anti-war movie to the Tennessee online news and entertainment magazine ‘One Under the Sun’.

In addition, she is also an award-winning dancer competition between 2007 and 2014 in the styles of Ballet, Contemporary, Tap, and musical theatre. Likewise, she has also got a YouTube channel showcasing these performances Miss Ava Cantrell.

She might have accumulated a huge sum of money from her career and according to some online sources, her net worth is estimated to be in million dollars. An average salary of child actors ranges from $50-$100 per hour on the basis of performance and their role.

Moreover, she is also active in several charitable organizations like the LA Mission as well as an Animal rescue center.

During an interview with DailyMailTV, she told that a man grabbed her neck and she had to fight him off after he refused to let her go. However, she did not reveal where the incident happened and who the attacker is but the man is believed to be in the entertainment industry. She added that having the conversation about women’s equality is the first step and a very important one.

Ava Cantrell has a height of 4 ft. 3 inches and she weighs 44 kg. She has an attractive body of 34-23-35 and she has black hair and black eyes. Other information regarding her shoe size, dress size, etc, are not available.