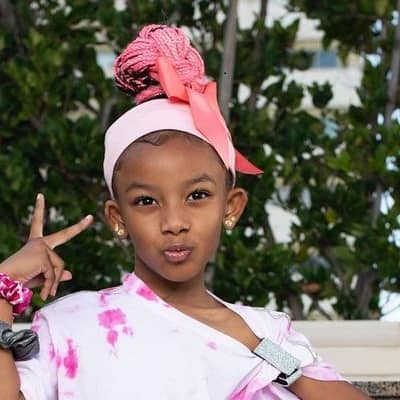 Ava Marie Jean Wayans is quite young to be in a romantic relationship. She is presently enjoying her life as a celebrity kid. Ava is more focused on her studies as of now.

Who is Ava Marie Jean Wayans?

Ava Marie Jean Wayans is a famed kid. She is best known as the celebrity daughter of actor Michael Wayans and Vanessa Simmons.

She is the only child of Mike Wayans (father) and Vanessa Simmons (mother). Her grandfather, Damon Wayans is also a renowned actor, comedian, and writer in the entertainment industry. Similarly, the name of her grandmother is Lisa Thorner.

She is still studying in high school. Moreover, she holds American citizenship, and her ethnicity is African-American.

Ava is a Pastry Kids model. She modeled her mom and aunt’s shoe brand. In 2007, her mother, Vanessa created pastry Shoes alongside her sister, Angela Simmons. She usually modeled the sneakers alongside her mom.

Her mother debuted in the entertainment industry in the year 2005 in an MTV Reality show, Run’s House. The series is about the family life of her dad and hip hop legend, Joseph Simmons. Similarly, she appeared in several movies and web series such as Boogie Town, Dysfunctional Friends, Mixed, Project Runway, and more.

On the other hand, her father, Michael is an actor and comedian who is best known for his role Young Darryl in the movie, Blackman. He appeared in TV series such as My Wife and Kids as Mike, The Underground, Dance Flick, and One Night Stand.

Ava is currently enjoying the wealth of her parents. She hasn’t engaged in any profession or job till now. Talking about her parent’s net worth, her father, Michael has an estimated net worth of $2 million as of 2021.

Similarly, her mother, Vanessa has accumulated a net worth of around $8 million.