Ava Max is a singer-songwriter. Ava is the Most Streamed EDM Female Artist. She is low key about her affair.

Ava Max seems to be a private person. She hasn’t yet disclosed any information regarding her romantic dating life including past and present relationships.

So, she is currently single as there are no signs of her having any affairs. 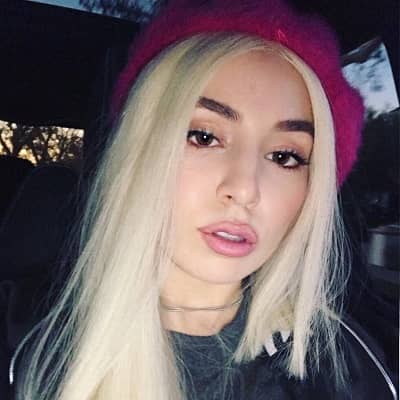 Whenever I'm feeling down, I remind myself that my flaws make me perfect, because in reality there is no perfect.

Oh my gosh, I mean, I've had many experiences of men calling me psycho.

She's been around so long and she doesn't disappoint ever. Gaga also thinks out of the box and that's what the best artists do.

Who is Ava Max?

Ava Max is an Albanian-American singer and songwriter. She is known for her signature hairstyle, which she dubbed the “Max Cut”.

Ava is recognized through her Single Sweet but Psycho which reach the #1 spot on the music charts of Sweden, Norway, and Finland.

The singer was born Amanda Ava Koci on February 16, 1994, in Milwaukee, Wisconsin, Unites States. She holds an American nationality and is of Albanian descent.

She is the daughter of Paul Koci, father, and Andrea Koci, mother. Her mother was an opera singer whereas her father was a pianist. Max has also an older brother however his name is unknown.

Her parents emigrated from Albania in 1990 to France where they lived there for one year before they got American passports.

Ava attended Lexington High School for a year where she recalled being constantly bullied.

From an early age, she began her career as a musician. At the age of 8, she competed in numerous Radio Disney and singing competitions at Greenbrier Mall in Chesapeake.

At the age of 10, she debuted at the NorVa in Norfolk as an opening act, where she performed Whitney Houston’s 1987 song “I Wanna Dance with Somebody (Who Loves Me)”.

Before, Ava signed with Atlantic Records she appeared in “Anyone but You” along with Canadian record producer Cirkut released on SoundCloud in July 2016.

She was featured on the Le Youth song “Clap Your Hands” released on August 4, 2017, where she sang two different melodies. On April 20, 2018, she made her debut single “My Way” the song peaked at number 38 on the Romanian Airplay 100 chart.

Some of other are,

Ava has often been compared to the Born This Way singer Lady Gaga for her music. Also, her platinum blonde hair, persona, and stage name are compared. Despite being a huge fan of Gaga, she doesn’t like comparisons.

Besides, she hasn’t yet faced any rumors and scandals that hamper her career and personal life.

The American singer and songwriter have a net worth of $4 million as of 2022.

Furthermore, no details are available regarding her monthly salary and yearly income.

Likely, she got dark brown eyes with blonde hair. However, she has done hair experimenting with different haircuts and colors.

Furthermore, details regarding her other body measurement are not available.

Ava is also active on Soundcloud and Spotify. She has also received a silver play button on Spotify with over 1 billion streams.

Furthermore, she is also active on Tiktok with over 1.3m followers.