Posted by MarriedBiography Posted on June 22, 2021 | In Dating , Relationship
Share this 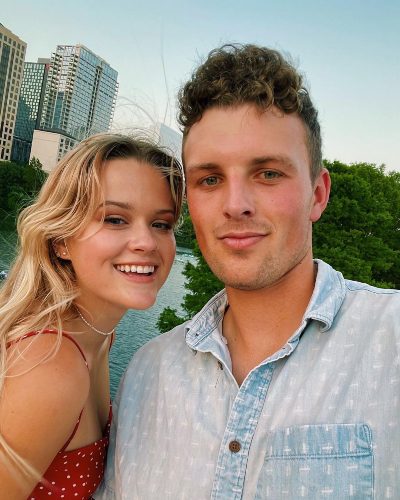 Ava Phillippe, the 21 years old daughter of Reese Witherspoon who looks more like her twin has a boyfriend! She shared to Instagram her rare picture with her boyfriend Owen Mahoney. The lovers were smiling in the selfie which was taken at the Congress Avenue Bridge in Austin, Texas. Ava captioned,

“The bats were feeling shy…so here’s a pic of us instead,”

Her parents seem to have approved their relationship as mother Reese commented on the picture with a heart-eye emoji and wrote,

Ava has been dating her boyfriend Owen Mahoney who also studies at UC Berkeley since 2019. When she had posted a now-deleted picture with her boyfriend back in 2019 fans pointed out his resemblance with her father Ryan Phillippe. They commented that the couple looks like the younger versions of Reese and Ryan.

Also read Reese Witherspoon’s three kids are all graduating this summer! She throws a party for them at her home!

What is the age of Ava Phillippe?

Ava Phillippe was born on 9th September 1999 in Los Angeles, California. She is 21 years old at present. She is the daughter of Ryan Phillippe and Reese Witherspoon. Likewise, she has three siblings Deacon Reese Phillippe, Kailani Merizalde, and Tennessee Toth.

Ava is known for her modelings stuff on Instagram. She has partnered with brands like Tiffany and Co. and Chanel. Likewise, she made her debut as a model in 2018 Rodarte’s fall collection. Her mother Reese is an American actress, producer, and entrepreneur who has worked in TV series like Little Fires Everywhere, The Morning Show, Big Little Lies, and more.

Likewise, her father Ryan Phillippe is an American actor who has worked in the TV series Big Sky, Shooter, Secrets and Lies, Damages, and One Life to Live. Likewise, Ava has gained 955k followers on her Instagram account.

Academy Award winner Reese Witherspoon is an American actress, producer, and entrepreneur. She is active in the entertainment field since 1991 and she is best known for her appearance in the films like Hot Pursuit, Gone Girl, This Means War, Walk the Line, Cruel Intentions, and Legally Blonde. Read more bio…