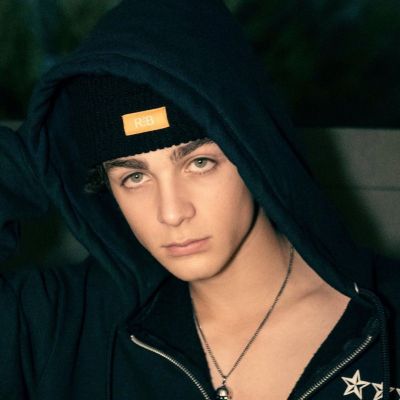 Talking about his relationship details, Avi Angel is presently dating a social media personality, Caroline Gregory. He has shared some happy moments on his official Instagram account.

Other than that, Angel has been secretive towards his relationship details. Previously, he was dating a girl named Isabella in October 2020 but they separated in September 2021.

Who is Avi Angel?

Avi Angel is a well-recognized American actor and celebrity brother. Angel is widely famed as the younger brother of Asher Angel who is also a child actor.

Avi Angel was born on 10 January 2006. At present, he is 16 years young star. Likewise, his birthplace is Arizona, the USA.

Avi is the son of his father, Jody Damon Angel whereas his mother is Coco Angel. Moreover, he has an elder brother named Asher Angel and a younger sister named London Bleu Angel.

Talking about his nationality, Angel holds an American identity whereas his ethnicity is English, Irish.

Regarding education, the star might be in his higher school. He has not mentioned his educational details to the public till now.

Avi started his career in 2008 in the short role in the drama film, Jolene. The film is based on the short story, Jolene: A Life by EL Doctorow. He played the role of the 7-month-old version of the character, Brad Benton who was born into a wealthy family.

His brother, Asher portrayed the role of a 5-year-old version of Brad. The film was co-produced by Avi’s maternal grandfather, Riva Yares who is a famous star in the Scottsdale art world. His next project featured in 2017 where he was set to feature as Ivan in the 2017 miniseries, Crossroads.

Moreover, Angel performed in one of its episodes named Lighting Bug. He also featured in the episode name, I Got Your Number in the third season of the ‘Disney Channel’ teen comedy-drama ‘Andi Mack’. The actor also played the young version of the character, TJ Kippen, a basketball team captain.

The actor has also participated in Arizona’s Fashion Week 4 Kids. He is also active on YouTube with nearly 16k subscribers at the moment.

A well-known personality, Angel has earned a handsome amount of money from his profession. He lives a happy life along with his family.

However, the young actor has not disclosed his exact salary, earnings, and assets details till now.

Avi has never been part of any controversial matter or rumors till now. The star has been preoccupied with his professional and private life.

It seems that Angel prefers enjoying his personal life and does not want to merge it with his professional life.

16 years juvenile star, Avi has handsome looks and an admirable personality. He stands at a height of 5feet 8inches. Also, he has a balanced body weight of 50 kg.

Furthermore, Angel has green eyes whereas his hair is black.

Regarding his social media presence, Avi Angel is an active personality on social media. Avi has more than 347k followers on his official Instagram account @avisamuelangel.

Moreover, Angel is also active on YouTube with more than 16k subscribers at the moment.