Awsten Knight is an artist, vocalist, and guitarist of band, Waterparks.

The current relationship status of Awsten Knight is single.

Previously, he was in a relationship with Ciara Hannabut. They dated for a few years. But their relationship ended in bitter terms.

From his Instagram, we know that he is an animal lover. He regularly posts pictures of dogs and goats. 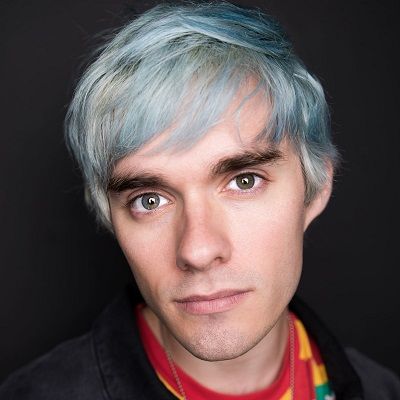 Awsten Knight is an American artist. Awsten is a well-known rock singer. He is the lead vocalist and guitarist of the Houston-based band, Waterparks.

Since the year 2011, he is in the music group Waterparks.

Awsten Knight was born on 17th January 1992 in Houston, Texas. He belongs to a family of four comprising of a nurse-father, PE teacher-mother, and a younger sister.

When he was in grade four, Sum 41’s song inspired him to pick up the guitar. He decided to drop out of college to pursue music. His decision shocked his parents.

But recently in September 2019, he posted photos wearing green caps and gowns. In the photo, he was holding a certificate from the State University of Sheffield that he had received his Ph.D.

He captioned the photo,

“WE’RE OFFICIALLY GRADUATES! TOURING DIDN’T STOP ME FROM GETTING MY PHD SO NOTHING CAN STOP YOU FROM DOING ANYTHING EXCEPT TELEPORTATION, U JUST CANNOT DO THAT”

Awsten was the target of a bully during his teen years. However, he used all this as an advantage to grow up.

The reason behind his being targeted by the bully was for having eyes of different colors. He was called ‘The Devil’ for his two-colored eyes.

Before forming Waterparks he was in a band with Otto Wood named The Blue Poptarts. Their first release was Black Light in which he was a lead guitarist.

In the year 2011, they formed the rock band, Waterparks in Houston, Texas. Other members of the band are the vocalist and lead guitarist Geoff Wigington and drummer Otto Wood.

They released three EPs, among which two were released independently while the third was released via Equal Vision.

Similarly, on November 4, 2016, they released Waterparks’ first full-length album, Double Dare. On 23rd May 2019, they signed on with Hopeless and left the music company Equal Vision.

With Hopeless, their third full-length album named Fandom was released.

Awsten has psychedelic hair. Likewise, he has heterochromia, so the colors of his eyes keep changing.

You may also read the age, parents, career, net worth, body measurements, and social media of Phil Anselmo, Lars Ulrich, and Vince Gill