Ayda Field is a model, actress, and TV presenter. She is married and a mother of four kids.

Ayda Field is a happily married woman with four children. Her husband is a British well-renowned singer and songwriter Robbie Williams. The couple started dating in May 2006.

In 2009, Robbie officially proposed to Ayda during a live interview on the Sydney radio station “2Day FM”. Later on, the couple stated that the proposal was a joke and that they were not engaged.

However, the couple engaged over Christmas and tied the knot on 7th August 2010 at Robbie’s home in Mulholland Estate, Beverly Hills. On September 18, 2012, the pair welcomed their first child named Theodora Rose. 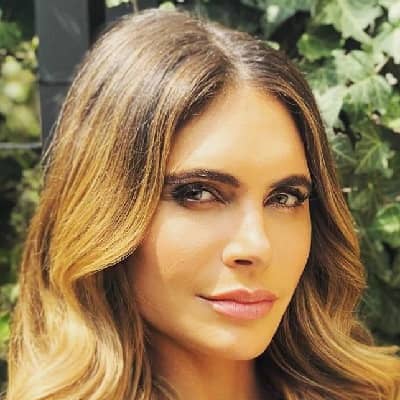 Therapy is so personal but it can be a really amazing tool so long as you are not forced into it.

Listen, my dad left me, my mom is crazy, I'm from L.A., a pop star dumped me three times and I'm an actress who gets rejected constantly.

Who is Ayda Field?

Ayda Field is an American renowned model, actress, and TV presenter. She has appeared as a regular panelist from 2016 to 2019 on the television show Loose Women in the united kingdom.

She also worked as a judge on the British version of The X Factor alongside her husband Robbie Williams, Simon Cowell, and Louis Tomlinson.

Ayda was born on May 17, 1979, in Los Angeles, California as Aysa Sabahat Evecan. After marriage, she has also known as Ayda Williams.

The name of her parents is Haldun Evecan (father) and Gwen Field (mother). Ayda’s father is a Turkey native whereas her mother is an American who is a film producer by profession.

When Ayda was about 4 years old her parents parted ways then she was raised by her mother. Her father moved back to Turkey and they didn’t have much contact.

However, she had contacted him before her wedding. Sadly, her father passed away in 2014 at the age of 68 after suffering a heart attack.

She holds an American nationality and belongs to mixed ethnicity of Muslim and Jewish.

Talking about Ayda’s academic history, she attended Harvard-Westlake School in Los Angeles from where she graduated in the year 1997.

Ayda steeped into television through a minor role in the year 1998 in an episode “Party of Three” of City Girls.

She rose to fame from the NBC soap opera Days of Our Lives where she portrayed the role of Angela Moroni. In 2001, she debuted on the big screen through the movie, Young Blades.

In 2016, she made her UK TV debut through the comedy-drama television series Fresh Meat in the final series. That year she also joined ITV’s Loose Women as a guest panelist. She also joined The X Factor as a judging panel in the year 2018.

To date, Ayda has managed to maintain a clean image. She hasn’t been part of any sorts of rumors and controversy that could hamper her personal and professional life.

However, her salary and other income are still under review.

Similarly, her husband’s net worth is in the millions about $300 million.

Ayda owns around $100 million worth of real estate together with her husband. Almost all of the real estate was bought after their marriage.

A year after, the pair bought a London mansion that has 46 bedrooms for $22 million.

Recently, the pair bought the stunning secluded villa (356 sqm) in Switzerland from businessman Nicolas Brunschwig over a game of golf for $42.9 million.

The actress has well-maintained body physic. She stands at a height of 5 feet 8 inches tall and weighs about 54 kg.

She dyed her hair in blonde color and has brown pair of eyes.

The actress has a verified Instagram account where she has more than 623k followers. She is also active on Facebook with over 6k followers and 5.6k likes.