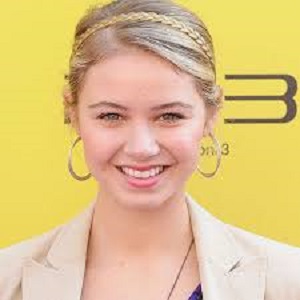 Ayla Kell Started dating Sterling Knight in November 2014. He is an actor. They met for the very first time on the set of ‘Melissa & Joey’.

The duo announced their engagement in October 2018.

Who is Ayla Kell?

Ayla Kell is an American actress and social media personality. She is popular for her role as Payson Keeler in the ABC Family series ‘Make It or Break It’.

She was born on October 7, 1990, in Los Angeles, California, USA. Her birth name is Alya Marie Kell. She is currently 29 years old.

Her mother’s name is Jane Kell but her father’s name is not available. She holds American citizenship and her ethnicity is a mix of German, Irish, and English.

She studied ballet since her young age and she danced with the American Ballet Theatre at the Kodak Theatre in Hollywood, California, as Greta in ‘The Nutcracker’. She finished her 15 years of Royal Academy of Dance ballet dance training at the Los Angeles Ballet Academy.

She competed in the finals at the Youth American Grand Prix in New York City. She performed her feature dance at Valentino’s International Carousel in Tokyo, Japan. Along with that, she has made her appearance in many international commercials for Disney, Mattel, and Pringles.

There is a rumor that she will marry her boyfriend Sterling Knight as soon as possible. But, neither of them have announced their marriage.

To know more about Pisay Pao, Kate French, and Hannah Marks, please click on the link.